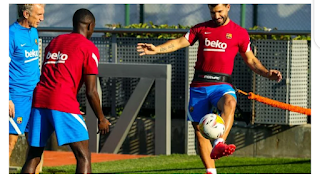 Sergio Aguero and Ousmane Dembele both returned to training for Barcelona on Monday, with neither having played yet this season, the beleaguered Catalan giants said.

Argentina striker Aguero, who joined from Manchester City in the close-season, is still waiting to make his Barca debut after suffering a right calf injury in August.

“The new faces (in training) were Ousmane Dembele and Sergio Aguero, both currently recovering from injury,” Barcelona said in a short statement, although they added that the pair only trained for “part of the session”.

French forward Dembele is returning after surgery on a knee injury he sustained in June.

The news will be a welcome boost for Barca coach Ronald Koeman, whose side have made a poor start to the campaign, losing twice without scoring in the Champions League group stage.

According to Spanish media reports, Aguero and Dembele could even feature against Valencia in La Liga on Sunday.

The 33-year-old Aguero left Man City after a decade at the club in which he became their all-time record scorer with 260 goals.