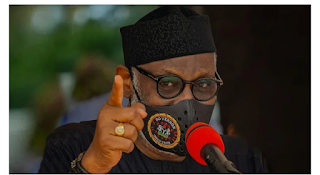 Ondo State Governor, Rotimi Akeredolu, and some of his counterparts across the country have called for urgent restructuring of the country as well as fair and equitable treatment of states in the distribution of resources by practising true fiscal federalism.

Akeredolu, who made the call on Friday in a statewide broadcast to commemorate the 2021 Independence Day Celebration, called for urgent restructuring of the country to reflect the diversity and address the various misunderstandings and high rate of criminality in the polity.

The governor said the current system adopted in the county did not encourage ingenuity.

He said, “It has become imperative that the current structure be tinkered with in a fundamental way. It is no longer sustainable. Our country is blessed abundantly. There is hardly any part of this vastly endowed space that should not be self-sustaining. This land should not be a place where hunger, poverty and a general sense of lack predominate.

“We must be bold enough to interrogate why these challenges appear perennial. We must not shy away from the reality of our diversity which should, ordinarily, be a source of strength but is gradually becoming an albatross.

“The states of the Federal Republic of Nigeria appear independent nominally at present.

“Our people must strive under a system which recognises their God-given talents and promotes unique initiatives. All federating units must be less dependent on the Federal Government for basic survival.”

In Bayelsa, the state government cancelled a march past it had organised to mark Nigeria’s 61st independence and the state’s 25th anniversary. Although no official statement was issued on the abrupt cancellation of the event, Saturday PUNCH gathered that the decision was prompted by ‘security reasons’ fueled by the Buhari-Must-Go protests that rocked Abuja in the early hours of Friday.

But the State Governor, Douye Diri, in an earlier statewide broadcast had called on the President, Major General Muhammadu Buhari (retd), to be fair to the state and the Niger Delta people in the distribution of resources.

He urged the President to adhere to the principles of federalism and ensure that amendments to the Petroleum Industry Act reflected fairness and equity for the region.

He said, “Today, we are marking our silver jubilee as a state. The significance of these twin events falling on the same day must not be lost on us. It is absolutely fitting and auspicious that Nigeria and Bayelsa State share a common birthday.

“I appeal to the President to ensure that Bayelsa and the rest of the Niger Delta are fairly and equitably treated in the distribution of resources, particularly by practising fiscal federalism and the amendment of the Petroleum Industry Act recently signed into law.”

Governor of Rivers State, Nyesom Wike,  says Nigeria, as a nation, has performed abysmally for 61 years and it’s time to quickly muster measures to rescue it from the wrong direction it is headed.

The governor gave the charge at the March Pass and Parade event in commemoration of the 61st Independence of the country held at Sharks Football Stadium, Port Harcourt on Friday.

According to him, the worse happened to Nigeria with the military incursion and the country snapped and set itself on the reverse course because of the unpatriotic pressure and frustrations that were exerted.

Wike said democracy was dismantled as a result, and the federal system was distorted with politically-inspired balkanisation that divided the country into inequitable, unviable and dependent states and local government areas.

“However, the restoration of democracy in 1999, after a protracted and bloody struggle and sacrifice, again, raised so much hope about the future of Nigeria and the aspirations of our people for a better deal from the government.

“With democracy, Nigerians expected the timeless values of the rule of law, judicial independence, inclusiveness, social justice, transparency and accountability to be the basis of governance and transformation.”

The governor suggested a national dialogue that will lead to the emergence of a new peaceful, united and prosperous Nigeria based on justice and equity.

“Above all, we must defend the basic structures of democracy and good governance by rising up to protect our right to free, fair and credible elections by demanding the immediate incorporation of electronic voting and simultaneous transmission of results into our electoral system, which the nation’s electoral management body has repeatedly said, it has both the capacity, commitment and infrastructure to effect if only the National Assembly would allow.”

Plateau State Governor, Simon Lalong, has stressed the need for all Nigerians to rise up against corruption, unemployment and insecurity which he described as impediments to national growth.

Lalong stated this on Friday in Jos at the 61st Independence Day parade which was held at the Rwang Pam Township Stadium.

He said, “Here in Plateau State, our administration has continued to rebuild the major fabrics for development which are peace and security. We have made a lot of progress to institutionalise peaceful coexistence through the Peace Building Agency and the Inter-Religious Council.

“Our efforts are, therefore, aimed at consolidating on this stability by strengthening security architecture and ensuring that justice prevails for all those who were attacked.”

Lagos State Governor, Babajide Sanwo-Olu, has called on Nigerians to unite to move the country forward.

Sanwo-Olu said this on Friday during his address at the 61st Independence Day parade held at the Agege Stadium, Agege.

He said, “More than ever before, it is time for all of us to close ranks, and view our differences not as a stumbling block but instead as an energising force, and unite with renewed determination and commitment to move this country forward against all odds.

“The challenges we have been confronted with at any time within the last 61 years have been and are no doubt daunting, but certainly not insurmountable. A new mindset is required to overcome them; a conviction that it is possible, and that our strength truly lies in our diversity.”

Sanwo-Olu also urged Nigerians while being mindful of the country’s various challenges not to lose hope.

Not a bed of roses since independence –Ayade

Cross River State Governor,  Prof Ben Ayade,  says it has not been a bed of roses for Nigeria since the country attained independence  61 years ago.

He stated this on Friday while delivering his Independence Day speech at the U.J. Esuene Stadium in Calabar.

He said, “Instructively, as we celebrate today, we cannot say with absolute conviction that 61 years down the line, it has been a bed of roses. At best, it has been an admixture, sometimes chequered, disappointing, hard and fraught with challenges that so often tend to numb our spirits.

“In the last 61 years, we have demonstrated more commitment, greater faith and unflinching belief in the project called Nigeria than anyone would have imagined. We have survived brutal assaults, wriggled through tremors of recurring violence and sailed through the sea of divisive politics. As a people, we are currently confronted by a wave of insurgency and banditry. But against all odds, we have continued to bounce back, to rediscover ourselves by staying focused, steadfast and optimistic. And with the Almighty God watching over us, our dear country shall overcome.’’

Kwara State Governor, AbdulRahman AbdulRazaq, has said that the country remains great and full of potential, irrespective of its current challenges of nationhood and development.

“I join Mr President and the rest of the country to felicitate our compatriots, especially the people of Kwara State, on the 61st independence anniversary. There is no pretending that our country is undergoing a truly challenging phase in national development. However, I am upbeat that we will emerge better, stronger, more united and prosperous as a people,” the governor said in his Independence Day statement.

Meanwhile,  Oyo State Governor, Seyi Makinde, has lauded security agencies in the state including Amotekun for the improved security situation.

He said their commitment and prompt actions were responsible for the new level of security being enjoyed in the state.

Makinde said this on Friday at the 61st independence celebration, held at the Lekan Salami Stadium, Adamasingba, Ibadan.

The governor, who was represented at the ceremony by the Secretary to the State Government, Mrs Olubamiwo Adeosun, also said everyone should be proud of being Nigerian.

The Alaafin of Oyo, Oba Lamidi Olayiwola Adeyemi, was present while the Olubadan of Ibadanland, Oba Saliu Adetunji, was represented at the ceremony by Chief Lekan Alabi.

Also, Edo State Governor, Godwin Obaseki,  has charged Nigerians to be united, resourceful and reignite the indomitable Nigerian spirit so as to triumph over the myriad of socio-economic challenges the nation is faced with.

Obaseki, in his message to commemorate the country’s 61st independence anniversary, urged citizens to be hopeful, prayerful and continue to work towards sustained peace, unity and progress of Edo State and the country.

He said, the global pandemic, the difficult economic situation and the insecurity we currently face may seem threatening to the fabric of our nation, but if we unite and ignite our indomitable Nigerian spirit, we shall overcome and emerge as the victorious people that we are.”

Similarly, Governor Ifeanyi Okowa of Delta State in his independence anniversary speech in Asaba on Friday urged Nigerians not to lose hope in the ability of the nation to come out of its present travails.

The governor, who was represented by his Deputy, Kingsley Otuaro, said, “Though many of us may not see the need to celebrate, especially in the light of the myriad of security and other challenges bedevilling the nation, because we have a country that we can proudly call our own it is enough reason to give thanks to God Almighty.