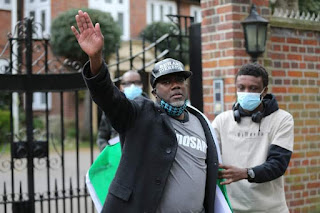 Nobody keeps #COVID19 vaccines at the expense of Nigeria and other countries as Buhari alleged in his broadcast. This type of beggarly and entitlement mentality is typical of Bambiala Buhari. Begging and demanding for vaccines as if it is a right. It is not. It is a privilege. If you want vaccines on demand, go and make them. If you can’t make them, then appeal and don’t demand.

Buhari said “we are winning” the fight against insecurity.

Boko Haram killed 30 soldiers in Borno last week, and 15 in Sokoto. An attack by Boko Haram in Sokoto shows an EXPANSION of Boko Haram, not a defeat. Bambiala Buhari lied as usual!

Buhari boasted of his arrest of Nnamdi Kanu. A big lie. He did not arrest Kanu. He illegally abducted him from Kenya. This is not an act of a law abiding member of the international community. What about Boko Haram? Why are they being pampered? Why are they being paid salaries and houses bought for them under ‘Operation Sulhu’ as so called repentant Boko Haram’?

Buhari says a leading member of the National Assembly is a sponsor of terror. Let him name that person. It is not enough to make allegations. Name names the same way his government exposed forex defaulters

Buhari talked about building new refineries. After 6 hopeless years in power Bambiala Buhari is still talking about what he will do, not what he has done? We have been hearing of these refineries for 6 years. Imaginary refineries?

Buhari blamed “middle men” for the food crisis in Nigeria. When will this man ever stop blaming? This is the same thing he said in 1983-85. Bambiala Buhari is incapable of taking responsibility for his failures. When will Buhari stop blaming.

Bambiala Buhari said he established a ₦15 trillion Infrastructure Corporation of Nigeria Limited called INFRACO. What he forgot to tell Nigeria is that he has no ₦15 trillion and that that money is a target, not money provided.

He said he has “prioritised Nigeria’s digital economy”. This is another Bambiala Buhari lie. Buhari banned #Cryptocurrency and #Twitterban due to his insecurities. Buhari has not prioritised digital economy. He has destroyed it!

Bambiala Buhari said he banned Twitter to prevent fake news and stop people from organising and coordinate criminal activities. That is another lie. Buhari suspended Twitter in Nigeria because Twitter deleted his tweet and he threw a tantrum

Buhari boasted of his goal of lifting 100 million Nigerians out of poverty. This is a joke, right? Under Buhari, Nigeria became the world capital for extreme poverty in 2018. Google it: 6 Nigerians enter extreme poverty every minute Buhari remains President

Bambiala beggy beggy Buhari boasted of repositioning the civil service. Yes. He is right. He is Northernising it. For the first time in Nigeria’s history, the heads of the Executive, Legislature and Judiciary are Northern Muslim Males. The Federal Character Principle has been abused and these tribalistic and nepotistic acts (his nephew, Sabiu Yusuf is his SA and one of the most influential men in Nigeria today) had affected national unity.

Buhari boasted of bringing youths into government. Yet, there is no single youth in his cabinet. The average age of his ministers is almost 60 years. None of them is younger than 45. His is the most youth unfriendly administration in our history

Buhari said there has been progress in our custodial (prison) services. Is this a joke? Under Buhari, prison breaks has occurred in almost all geopolitical zones. Prisoners live in terrible conditions. This is such an obvious lie

Bambiala Buhari said “No government since 1999 has done what we have done to put Nigeria back into track.”

In 6 years he has acquired ₦24 trillion debt.More debt than all governments since 1999 combined. So this is again another monumental lie! According to Transparency International, Nigeria is now more corrupt than at any time since 1999. And we are now the third most terrorised nation in the world, according to the Global Terror Index. Only Afghanistan and Iraq are worse than Nigeria.

Buhari boasted of Nigeria’s growing international diplomatic prestige under him. What a joke. Buhari has turned Nigeria into a beggar nation. Even in West Africa, Nigeria has lost place to Ghana. This is another Bambiala Buhari lie!