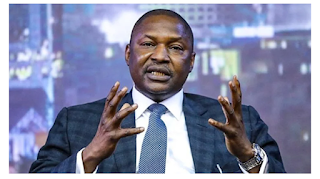 The Federal Government on Sunday threw its weight behind moves by herdsmen to sue southern governors over the anti-open grazing bill they recently signed into law.

The Special Assistant (Media) to the Attorney-General of the Federation and Minister of Justice, Dr Umar Gwandu, who disclosed this in an interview with The PUNCH, said Nigerians whose rights had been violated could go to court to seek protection.

Gwandu stated this as state police commands on Sunday differed on the enforcement of the law.

While Ebonyi and Osun state police commands told our correspondents that they would enforce the law, a source in the Lagos State Police Command stated that the police would only provide protection to the enforcement team of the state.

The Rivers State Police Commissioner, Friday Eboka, on his part said he had not seen a copy of the state anti-open grazing law.

But a top police officer told one of our correspondents that it would be difficult for state commands to enforce the law without the support of force headquarters.

The Miyetti Allah Kautal Hore group, while reacting to the passage of the law in the southern states, described it as ‘satanic’ and ‘politically motivated,’ adding that it would sue the governors over the law.

Gwandu, in an interview with one of our correspondents, stated, “The rights trampled upon are individual rights of Nigerians as constitutionally guaranteed.

“The Nigerians whose rights are violated reserve the right to approach the court for the protection of such rights within the context of freedom of movement among others. It will be viewed with that consideration in mind.”

In Ebonyi State, the state Police Command says it will arrest and prosecute violators of the anti-open grazing law in the state.

The Commissioner of Police in the state, Aliyu Garba, stated this in a telephone interview with one of our correspondents in Abakaliki, on Sunday.

When asked if the police would enforce the law,  Garba asked, “Why not? We will arrest and prosecute offenders. Come with a complaint and see whether it is not going to be attended to.”

Also, the Ogun State Police Command said that it was ready to implement the anti-open grazing law in the state as soon as possible.

The Police Public Relations Officer in the state, DSP, Abimbola Oyeyemi, said this in a chat with one of our correspondents in Abeokuta.

When asked when the police would begin the implementation, Oyeyemi said,  “We will begin as soon as possible.”

The Chairman of the Diobu vigilante, Prince Amatari who said during an interview with one of our correspondents said the group would enforce the law better than the police because of its presence in the rural areas.

“We have said that the security architecture should be decentralised because the responsibility of the police is much.

“And the police have not been able to effectively carry out their duties because the entire nation relies on them. If  arrests are made by other security agencies, including the Army, they take such persons to the police.”

When contacted, the state Commissioner of Police, Friday Eboka said, “They (the state government) have not passed the law to us. I have not seen it.”

Asked if the command was ready to enforce anti-open grazing law in the state, Osun Police Command said as law enforcers, it was duty bound to enforce any law made by the government.

The spokesperson for the command, Yemisi Opalola, said police in the state would enforce any law made.

She said, “We are law enforcers. Our duty is to enforce the law made by the government. We will enforce any law made by government in the state.”

Lagos police will only provide security for enforcement team – Source

Reacting to the readiness of the police command in enforcing the anti-open grazing law in Lagos State, a police source said the responsibility of the police was to provide security for the enforcement team established by the state government to enforce the law.

“The enforcement team is going to be trained and empowered by the state government, and a place like a ranch will also be established to keep the cows until the fine is paid.

The Ondo State Command of the Security Network Agency also known as Amotekun stated that enforcement of the state anti-open grazing law had commenced as some herders and cows had been arrested and dealt with according to the law.

The state Commander of the corps, Chief Adetunji Adeleye, said a number of cows and herders had been arrested and they were made to pay fine and signed an undertaking not to violate the law again.

He said “After the law has been signed, we arrested over 180 cows, together with some herders. We have a number of herders that have been arrested we are making them to comply with the enacted law which stipulates penalty for defaulting herders.

“The position of the law is that, if they choose to go to court, we would implement the law as it is stated, which stipulates the minimum of N100, 000 fine or three years imprisonment.”