Bandits are common criminals, they believe in one Nigeria: Lai Mohammed - The Naija Weekly

Bandits are common criminals, they believe in one Nigeria: Lai Mohammed 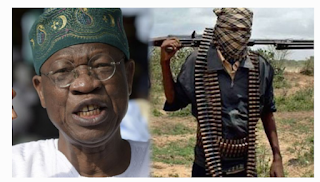 Mr Mohammed said bandits should not be compared with Boko Haram insurgents and IPOB separatists because they cannot be attached to a religious or an ideological goal.

“The difference between IPOB, Boko Haram on one side and bandits is that, while IPOB and Boko Haram are driven by ideology, a belief that they don’t want to be part Nigeria, bandits have no flags,” Mr Mohammed said on TVC’s ‘This Morning’.

“Bandits have no flag. Bandits are simple criminals. There’s no difference between bandits and other criminals other than their ferocity,” the minister said. “Bandits have never said they don’t believe in Nigeria, they are just pure criminals.”

Mr Mohammed’s comments came amidst growing calls for President Muhammadu Buhari to activate measures aimed at treating the vicious gangs of kidnappers terrorist groups. The minister’s position showed the government has yet to be convinced that the bandits warrant terrorism label.

Bandits, a loose network of criminals whose operations revolved largely around abduction-for-ransom in Nigeria’s North-West, have constituted a major national security threat in recent years.

Mr Mohammed said the administration will spare no efforts towards wiping out the criminals to foster peace and stability in the region.