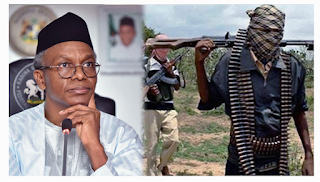 Bandits have on a daily basis killed an average of four and abducted an average of nine persons in the last three months in Kaduna, according to a security report by the state government.

This comes days after President Muhammadu Buhari claimed insecurity was on the decline, while accusing the media of inaccurately reporting the issue.

Presented on Wednesday by the Kaduna State Commissioner for Internal Security and Home Affairs, Samuel Aruwan, the report disclosed that 343 persons were killed, while 830 persons were abducted by bandits between July and September 2021.

“From July to September 2021, a total of 343 persons died due to banditry, communal clashes, violent attacks, and reprisals,” Mr Aruwan noted in the report.

This translates to an average of four persons being killed on a daily basis, with an average of nine abductions in the time under review.

During a presentation of the report, Kaduna governor Nasir El-Rufai said it reflected “the real agony of our citizens and communities, their pains and losses, and the fears and anxiety that have created considerable distress.”

Mr El-Rufai said that just two years after Mr Buhari assumed power, he had requested the regime to declare bandits as terrorists, adding that Mr Buhari’s reluctance to do so was stopping the Nigerian military from decisively dealing with the terrorists.

“We in the Kaduna state government have always aligned with the declaration of bandits as insurgents and terrorists.

“We have written letters to the federal government since 2017, asking for this declaration because it is the declaration that will allow the Nigerian military to attack and kill these bandits without any major consequences in international law,” Mr El-Rufai said.