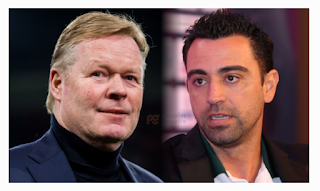 Following Koeman’s exit, sources said the club will open talks with Xavi Hernandez on Friday regarding the vacancy, with the former team captain now the first choice.

However, the same sources added that Barcelona does not expect to have a replacement in place until after the November international break.

An interim coach is set to take charge of the next three games against Alaves, Dynamo Kiev and Celta Vigo.

Koeman’s position had been seriously weakened after poor results prior to the October international break, with back-to-back defeats against Real Madrid and Rayo this week proving to be the tipping point.

The 58-year-old leaves Barcelona ninth place in the league and in danger of missing out on the Champions League knockout phase for the first time in 20 years.