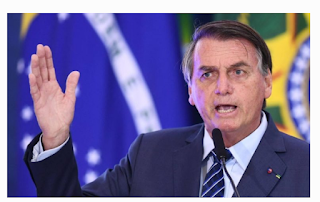 A Brazilian Senate panel on Tuesday indicted President Jair Bolsonaro for failing to prevent thousands of COVID-19 deaths and the crackdown on protesters who criticised his government’s overall response to the pandemic.

The Brazilian Supreme Court had in early July ruled that Mr Bolsonaro can be investigated for his involvement in an Indian vaccine deal that officials said included about $45 million in fraudulent invoices. Protesters who trooped out to demand the president’s impeachment amidst claims that his corrupt handling of the vaccine deal had led to thousands of deaths in Brazil.

On July 3, millions of Brazilians held protests across 40 cities with complaints that the deaths linked to the pandemic would have been significantly lower but for the president’s controversial response, including his insistence on herd immunity as other countries were racing to vaccinate their populations.

At least 500,000 Brazilians have succumbed to the deadly virus as of June 2021, and the latest figure indicated up to 604,000 deaths from 21.7 million infections across the country.

Following months of investigation, the Brazilian Senate recommended Mr Bolsonaro for murder charges and condemned his response to protests that enveloped the country when the scandal broke earlier in the year.

Mr Bolsonaro was “principally responsible for the government’s errors committed during the COVID-19 pandemic,” according to the report leaked to Brazilian press.

The lawmakers criticised Mr Bolsonaro’s ”reckless and unfounded belief in the theory of herd immunity by natural infection and the existence of a treatment,” the report says the president was aware of “a concrete risk of mass infection.”

”With this behavior, the federal government, which had a legal duty to act, agreed with the death of Brazilians,” the report added.

Mr Bolsonaro has denied the charges and condemned the Senate report as “a joke” that was “politically-motivated.” It was unclear whether he would be arraigned because the report will be forwarded to the country’s chief prosecutor who was appointed by the president and both still widely considered political allies.