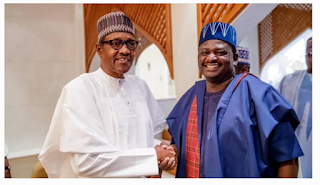 Presidential spokesman Femi Adesina has said President Muhammadu Buhari’s threat, and subsequent implementation, of a divisive allocation of position and federal resources on the basis of 2015 election results was politically expedient.

“It is natural in politics,” Mr Adesina told Vanguard when asked about the controversial approach in an interview published on Sunday.

Mr Buhari faced criticism in July 2015 when he said he would be more attuned to favouring regions that gave him electoral victory during the March 28, 2015, presidential poll than those who voted for his opponent.

“The constituents, for example, that gave me 97 per cent [of the vote] cannot, in all honesty, be treated on some issues with constituencies that gave me five per cent,” Mr Buhari said at a town hall organised by the United States Institute of Peace in Washington on July 22. “I think these are a political reality.”

The statement immediately elicited fireworks across Nigeria and has continued to define the legacy of Mr Buhari’s presidency. He has since sidelined the Igbo-dominated South-East from national security, economy and other critical areas of democratic governance.

Mr Buhari did not apologise or walk back his comments more than six years on, and Mr Adesina’s response to Vanguard on the matter indicates the administration’s intention to dig its heels in.

“The highest place where Buhari got maybe about 20% was Abia due to Kalu’s influence, in Ebonyi because David Umahi even when he was in PDP had always loved the President,” Mr Adesina said. “He didn’t score more than 20% anywhere even when what he required was 25%. So the southeasterners will need to readdress their politics, play more national politics.”

Even though Mr Buhari’s cabinet appointees and federal projects concentration failed to reflect the ethnic and religious balance of Nigeria, Mr Adesina said the president should not be seen as a sectional leader.

“Mischievous people took only the earlier part of the statement and cut out the rest just because they wanted to generate controversy,” Mr Adesina said, arguing further that a list of federal appointees under Mr Buhari showed there were more people from Ogun and Imo than other states.