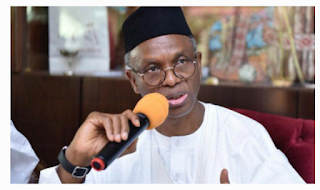 “We need competent people in political and public services, but this is not the case in Nigeria, and things will not work.

“Unless the best and brightest hands are in the political system, the outcome will be sub-optimal and terrible,” Mr El-Rufai was reported by The Cable to have said during a panel discussion at the Nigerian Economic Summit in Abuja on Tuesday.

The Kaduna state governor also berated Nigerian business elites for refusing to get involved with the country’s politics, adding that the economic class were only concerned with doing business, making money and living in highbrow areas.

“This is why I keep appealing to the educated, the experienced, and the accomplished in Nigeria to please come into political parties.

“Let us have a mass of decent people in politics, everything else will follow. But if we allow our political system to be populated by people with nothing to lose, this country will never achieve its potentials,” he added.

His comment comes as Mr Buhari continues to appoint individuals with questionable characters to head agencies under his regime, an example being the chairman of the Economic and Financial Crimes Commission (EFCC), Abdulrasheed Bawa.

In February, The Nigerian Senate confirmed Mr Bawa as the new head of the EFCC, despite a series of corruption allegations against him.

The Gazette reported how Mr. Bawa was summoned to the EFCC for selling over 240 confiscated trucks to his cronies in action, following which he was arrested and detained at the EFCC headquarters for several days.

As further punishment, he was sent to the EFCC training academy by former acting chairman Ibrahim Magu, who has now been driven out of office following corruption charges of his own.

However, on February 16, Mr Buhari nominated Mr Bawa to lead the EFCC, prompting him to quickly launch an image-laundering campaign using several online and traditional platforms to tell flowery stories about his professionalism.