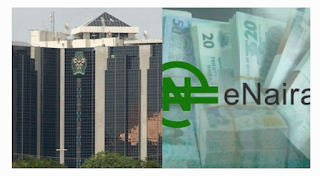 The Central Bank of Nigeria (CBN) has been caught plagiarising the policy and terms of use of an American wireless equipment supplier as its own policy on the eNaira website, Peoples Gazette can report.

Nigeria’s digital currency, marketed to boost cross-border trade and other financial activities, was launched on October 25 by President Muhammadu Buhari amidst a televised fanfare, after its botched unveiling on the nation’s Independence Day on October 1.

During its launch, Governor Godwin Emefiele had said that extensive research had commenced on the adoption of the digital currency as far back as 2017. Mr Buhari touted the policy as the first in Africa and nudged his aides to milk its novel attributes for scarce public relations glory.

However, checks on the eNaira website by Peoples Gazette have exposed how Africa’s largest economy’s digital currency policy was lifted from JLG’s website, despite having four years to plan.

“In no event will licensor or its officers, directors, employees, agents, representatives, affiliates or contractors (collectively, the “released parties”), be liable to licensee or any third party for any use, interruption, delay, or inability to use the software’ lost revenues or profits; delays, interruption or loss of services, business, or goodwill; loss or corruption of data; loss resulting from the system or system service failure, malfunction, or shutdown; failure to accurately transfer, read or transmit information,” the document read on JLG’s website.

A thorough check indicated that a part of the limitation of liability clause on CBN’s website was lifted verbatim from U.S.-based JLG, a wireless innovation company based in McConnellsburg, about 70 kilometres southwest of Harrisburg.

“In no event will the CBN or its directors, officers, employees, independent contractors, affiliates or agents, or any of its or their respective service providers, be liable to you or any third party for any use, interruption, delay or inability to use the eNaira website, lost revenues or profits, delays, interruption or loss of services, business or goodwill, loss or corruption of data, loss resulting from system or system service failure, malfunction or shutdown, failure to accurately transfer…” eNaira’s policy read.

A spokesman for the CBN declined repeated requests seeking comments on the bank’s conduct.

President Buhari himself had been caught repeatedly plagiarising quotable quotes from Barack Obama and other world leaders. News articles and columns are regularly plagiarised by a large section of print and broadcast journalists nationwide without consequences.

Nigerian lawyer Malachy Odo decried the CBN’s action as a show of shame.

“In normal climes, those responsible for this show of shame wouldn’t need to be prompted to resign,” Mr Odo said.

This is, however, not the first time the CBN will be caught using other people’s work without attribution. In 2012, its then-Governor Lamido Sanusi was caught lifting quotes from an American professor without attribution. The bank later admitted wrongdoing and blamed a speechwriter for it.

The then governor had copied Mr Dike’s intellectual work and presented the idea as his during a public lecture in Edo State without proper attribution.

The apex bank, in a statement by its former corporate communications chief Isaac Okoroafor, defended Mr Sanusi, stating that he did not develop the speech.

“In the case of the CBN, such papers, even though presented by the Governor, represent our collective views and are prepared by professional researchers in the relevant departments of the Bank. We can vouch that such papers are prepared in line with strict global and ethical standards,” the statement parlty read.

Already, the CBN has been locked in a fierce legal battle over the adoption of ‘eNaira’ word mark after a private firm said it registered a trademark for the name in 2004 and filed a copyright infringement lawsuit.

The firm, Enaira Payment Solutions, in its lawsuit sought a restraining order against the launch of e-naira by the apex bank on October 1, 2021, a date initially scheduled for it.

A notice from the firm’s solicitors also stated that: “In the interim, the CBN is hereby warned to cease and desist from using or purporting to use the name eNaira for its product or in any way.”

On Wednesday night, The Gazette highlighted the controversial aspect of the eNaira terms of use that seemed inconsistent with the regulatory standards that the CBN had itself upheld in the commercial banking sector for decades. But it turned out that the odd clause was originally designed for an equipment manufacturer and not a financial services provider.

Lagos-based lawyer Inibehe Effiong said the CBN’s action underscores the danger in policymakers and their reliance on consultants. He demanded a thorough probe into the scandal, as well as punishment for errant personnel.

“It’s a very serious allegation against the Central Bank,” Mr Effiong told The Gazette on Thursday afternoon. “There should be internal administrative action on the persons responsible for the policy document as it shows that the Central Bank had no original thought.”