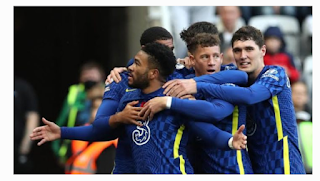 Chelsea’s win on Saturday against Newscastle has strengthened its lead on the premier league table and further reiterating their championship in Europe.

The game was tightly contested with Chelsea leading in possession with no goals until Reece James made a breakthrough shot in the sixty-seventh minute.

Reece’s goal paved the way for two other goals and Chelsea’s fourth consecutive win in the Premier League.

A total of three goals to nothing in favour of Chelsea, Saturday’s game leaves Newcastle to battle against relegation.