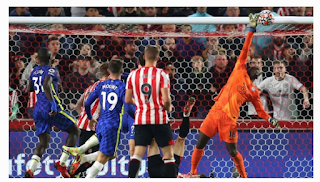 League leaders, Chelsea, kept their grip on the top spot in the English Premier League (EPL) on Saturday by beating neighbours Brentford 1-0, thanks to a Ben Chilwell strike.

But this was only after a string of last-gasp defending and saves by goalkeeper Edouard Mendy denied the hosts.

Chilwell scored for the second match in a row in the 45th minute when Brentford failed to clear and the ball dropped kindly for the England defender to strike from 12 yards with a half volley.

The hosts had earlier hit the post through Bryan Mbeumo and the Frenchman was again denied by the woodwork in the 75th minutes as the Bees subjected Chelsea to repeated wave of attacks in their push for an equaliser.

Brentford spent much of the first half pegged back by Chelsea, but the red and white shirts piled forward after the break, roared on by their supporters.

In the 83rd minute, Chelsea goalkeeper Mendy denied Saman Ghoddos and Trevoh Chalobah then saved the visitors by clearing off line from Christian Norgaard.

Mendy made further fine saves, including turning over an acrobatic overhead effort by Norgaard in injury time.

The result leaves Chelsea one point clear of Liverpool at the top of the table. Brentford is in seventh place on 12 points.