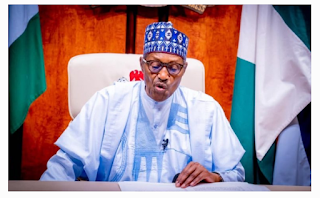 He neglected to mention the unemployment crisis. These three in many ways have contributed to the “japa wave” that we are currently witnessing, something which he only mentioned in passing to refer to “so-called leaders running abroad to hide”.

These three things I mentioned, health, security, and jobs, more than a lot of other things, symbolise hope lost by young Nigerians. And it is the potentially productive middle-class that is running. The elite, as always, have one leg in, and one leg out, because Nigeria is their farm, and as in the days of old, you work on the farm and take the fruits elsewhere to enjoy. Hypocrite that Buhari is, it has not occurred to him that he is just the same.

All his kids are schooled abroad, his wife lives in Dubai, and whenever he has a headache, he goes to London. He will probably move there after his eight ruinous years are done in 2023. And oh, pretty much every Nigerian who can afford it now has a second passport. Many of such people are Buhari’s pals.

In the past five centuries, Nigeria’s biggest export has been human beings. From the time of the Slave Trades (both Trans-Atlantic and Trans-Saharan), people have left the shores of this environment, either involuntarily, or voluntarily. Zenciye Emine Hanım and Ali Bey were from the Kanuri area of what is today Nigeria, and they got married in Ottoman Turkey and in 1883 begat Ahmet Ali who went on to become the world’s first black pilot.

There are many other examples of people from the area that became Nigeria, or from Nigeria itself since 1914, that achieved their potential in other climes, and therein lies the rub, something that Buhari has made a lot worse in his six years of maladministration…

Four years ago, my friend, Tunde, wrote about why many Nigerians were getting out: basically it is to put their kids in a position where those kids could achieve their potential in life, and this is what is fuelling a lot of the current migration. It is tragic.

Since independence, Nigeria has witnessed three great periods of mass migration. The current one, the fourth, is to my mind the most dangerous. You see, the first one started in 1966 and ended in 1973. It was brought about by the mayhem of 1966 and the subsequent war and was in the main by people from what we now call the South-East and South-South. It reversed when Nigeria saw an “oil boom” and there was “more money than we knew what to do with it”. Essentially, that first migration wave was brought about by hopelessness and ended by the return of hope. Most of those who took part in it returned.

Then the economy collapsed in 1980, and the next year, the second great wave began. First, when we chased away the Ghanaians in a wave of xenophobia, and then by the time Buhari came to power, it had accelerated into the “Andrew-don-check-out” phenomenon. This wave grew even bigger after Buhari was kicked out, and Babangida started his ill-fated structural reforms. Unlike in the first migration wave, most of those who left in this second wave did not return. Some of them have never even set foot in Nigeria since they left. This second wave saw, for the first time, other countries deliberately targeting Nigerian professionals.

I remember growing up on a university campus in the late 1980s, and pretty much every week, we knew of one doctor or the other who had moved to Saudi Arabia to work. By the very early 1990s, this second wave had slowed to a trickle. This was because most of those left behind could no longer afford the cost of migration. Yes, migration is a costly business, legal or illegal, and for the most part, especially the legal, those who can afford it tend to be the cream of society, something we’ll talk about soon.

The third wave started under Abacha and it was caused by suffering, pure and simple. This meant that rather than being middle class-driven, it was driven by the lower classes, and as a result, saw the advent of a huge number of illegals. Again, growing up in Benin City, I saw this happen.

Many people saw the few young girls and boys who had gone to “Belgium” return with wads of forex and build houses. It produced a near stampede as many, even as it became clear what their compatriots had to do in those foreign lands to make the money they were now splashing about, many just didn’t care. For them, a “little bit” of prostitution or gang activity was a small price to pay to avoid death by poverty, and many paid it.

The third wave is sometimes indistinguishable from the first because the gap in between them was less than half a decade. But both are distinct. One was driven mainly by the middle class and was largely legal, the other was driven mainly by the lower classes, and was largely illegal. Both never quite stopped, in short, even during the years of hope that followed the country’s return to civilian rule, the illegal one arguably escalated, but something new happened.

As of 2008, there was a phenomenon called “Africa Rising”. The sub-prime crisis in the West, and the economic growth we saw in places like Nigeria, engendered a sense of hope such that for the first time there was a flood of people returning.

Many of the kids of those who had left in the second wave, and many like myself, people who had grown up in Nigeria, went abroad to study and stayed to work. There was real hope in Nigeria’s future, and then we did something foolish, and 2015 happened, followed by the fourth wave, which, as I said earlier, is arguably the most dangerous for Nigeria.

You see, our British overlords left us a functional, if not broad-based educational system in 1960. This system was, for its purposes, capable of producing an adequate number of people to fill in the gaps left by the first wave of post-independence mass migration. Nigeria’s educational standards began to deteriorate, ironically, during the period between the first and second migration waves, when drunk with oil boom money, the government took over all schools.

By the time the economy collapsed, education was one of the things that started to suffer from funding gaps. But even after the second wave, the education sector could still fill the gaps created by people leaving.

Now it no longer can.

Nigeria has a jobs creation problem, true. But often not talked about is Nigeria’s lack of skills problem. Our education is simply not fit for purpose, and if the current trend continues, we will simply have no doctors (for example) to fill the gap created by those leaving.

The excellent trainers who trained the current crop are all either old and retired, or ageing and retiring, or tired and are leaving like their students. At some point, we simply won’t have lecturers to train enough new doctors, and the Saudis will stop organising medical fairs to recruit Nigerian doctors. It’s called terminal decline, and it’s affecting all sectors in the country, not only the health sector.