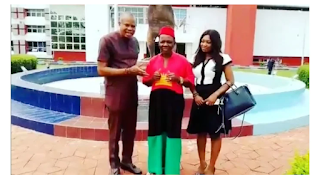 Nollywood Actor, Chiwetalu Agu, on Friday, donned the same ‘Biafra outfit’ that landed in trouble with soldiers when he was released at the Army Headquarters in Enugu State.

The PUNCH had earlier reported that soldiers on Thursday arrested the actor around Upper Iweka Bridge in Onitsha for wearing an outfit with Biafra inscriptions.

Agu was reportedly on a charity mission to the less privileged when he was arrested by soldiers.

The Nigerian Army in a statement said that the actor was arrested “while inciting members of the public and soliciting for support for the proscribed Indigenous People of Biafra.”

The Army also said the actor “dressed in a very well known attire of the proscribed group”, adding that he was being questioned.

But in a video posted by Nollywood actor, Emeka Ike, on his Instagram page on Friday, Agu was captured with two representatives of the Actors Guild of Nigeria.

One of the AGN representatives said the actor is hale and hearty.

Speaking in the video recorded on the premises of the Army Headquarters in Enugu, Agu, who wore the same outfit he had on when he was arrested, encouraged Nigerians to “keep supporting Nollywood. It’s the only hope we have to sustain both our public and private lives.”

Earlier in a viral video, the actor was seen seated on a bare floor with soldiers around him.

Agu had said, “I can wear this…this is rising sun, not Biafra, not Eastern Security Network…This is a civil dress

“With my education, I know areas to go, areas not to go

“I was sharing 10,000 worth of bread when he (soldier) came, no campaign, nobody was doing any demonstration or carrying people along. Even people who were hawking, I was giving them bread.”

Some Nigerians who were gutted by the action of the military had described the actor’s arrest as illegal.