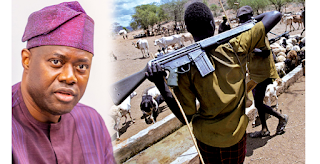 Ahead of the dry season, the Oyo State House of Assembly has urged the state government to implement the Anti-Open Grazing Prohibition Law.

At the plenary on Thursday, the lawmakers expressed worries that there might be renewed herders/farmers clashes in the agrarian communities across the state as the dry season approaches.

The motion states in part: “As the dry season approaches, herders and their cattle from the North will be moving down to the West to get greener pastures for their animals.

“The concern is that some of the herders will not restrict grazing of their cattle to uncultivated farmlands alone.

“Experience in the past would remind us of the bitter tales our farmers have had to tell.

“Many of our farmers have left their farms for either the fear of being killed by notorious herders or because of great losses they have recorded over time, due to the wanton destruction of their farms by these set of herders.”

The lawmakers said further that it had passed the Anti-Open Grazing Bill and was already signed into law by Governor Seyi Makinde.

The assemblymen said implementation of the law would checkmate the destruction of farmlands by the herders and also compel them to adopt the modern ways of rearing their animals.

In their separate remarks, the House Minority Leader, Asimiyu Alarape and another lawmaker, Simeon Oyeleke, urged the executive arm of government to take proactive measures toward addressing activities of the herders that carry guns around.

The Speaker, Adebo Ogundoyin, said activities of some of the herders carrying guns would continue to take its toll on food production in the area if not checked.