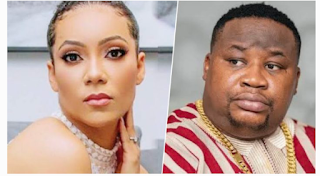 The socialite laid the allegation via a pointed message on his Instagram page on Sunday.

“@grandfish1 @Iam_lolofish_27 I get dollars for you, I get pounds for you, there’s nothing sweeter than family, wives stay woke girls like @mariachikebenjamin are coming for your husbands, she stole my sisters husband as if that’s not enough, she is sending her threats, that I won’t let it slide, Kelvin I Dey find una come that Dubai nothing must happen to my sister,” he captioned in the post.

In a follow up post with a video showing Maria and his brother-in-law Kelvin, who tried to cover his face, the outspoken celebrity went further to explain how Maria has been threatening his sister.

“@mariachikebenjamin how on earth will you threaten a married woman who has a male and female offspring to leave her husband for you or die?”

He also expressed how ashamed he is of his brother-in-law.

“Kelvin [I] am so ashamed of you, all of us Dey street, you no carry woman pass anybody but we can never make home miserable for our woman to the point a side chick calls your wife to threaten her life…”

So far, there has been no response from Maria or her team on the allegations.