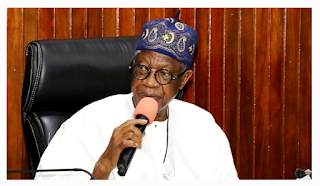 The Minister of Information, Culture and Tourism, Lai Mohammed, has pleaded with the House of Representatives Committee on Information, National Orientation, Ethics and Values not to cut the ministry’s budget proposal.

Mr Mohammed, along with some heads of agencies under the ministry, had appeared before the committee on Monday to defend the propaganda budget.

“My prayer is that please don’t reduce from what is presented. Don’t touch my budget because you will have no moral justification for accusing the executive of giving me small,” he said.

According to him, when he met his counterpart in China and asked how much their budget for information was, the Chinese said it was national security.

Members of the committee also expressed concerns over underfunding of the ministry.

“I don’t know why the Ministry of Information is being underfunded. And I see some state ministries being funded more than a whole federal ministry.

“We need to make an official report on this matter to the House. If we don’t need the services of the ministry of information again we should close it,” the chairman of the committee, Olusegun Odebunmi, said.

Mr Odebunmi said the budget of the monitoring unit of the Ministry of Sports alone was more than the information ministry and pledged to confront the executive arm on the matter.

He urged Nigerians, hard hit by the effect of Mr Mohammed’s propaganda over the years, to rally support for the ministry, pledging that rather than remove a penny from the budget proposal, the House will add to it.