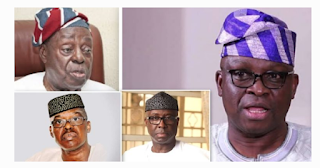 Afe Babalola, former Governors Niyi Adebayo, Ayodele Fayose and Olusegun Oni, were among the 48 persons honoured by the Ekiti Government on Saturday for their contributions to the creation, growth and development of the state.

The event was part of the activities marking the 25th anniversary of the creation of Ekiti and the celebration of the third year in office of Governor Kayode Fayemi.

Tagged “Oni Uyi Awards 2021”, the award was grouped into the following categories – ‘The Architects and Builders’ of Ekiti and six traditional rulers and 11 Posthumous awardees.

Mr Fayemi, in his remarks, said the award conferment is in compliance with the recently-passed and signed Ekiti State Honours Law, 2020, to recognise and reward distinguished and hardworking individuals in the state.

Congratulating the recipients for their selflessness, dedication and commitment across sectors in the state, Mr Fayemi said the award was devoid of partisanship.