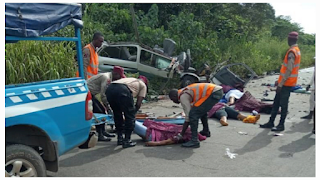 The Federal Road Safety Corps (FRSC) has confirmed that 11 persons lost their lives in a road crash on Sunday.

The Kwara sector commander of FRSC, Jonathan Owoade, who confirmed this to journalists in Ilorin, said the crash occurred on Jebba-Bode Saadu road.

He also said while 26 people were involved in the crash, 15 persons were injured, and 11 persons lost their lives.

“This (Sunday) evening, we received a distress call of a crash which happened around 4:00 p.m. at Onipako village, along Bode-Saadu-Jebba road. The road crash resulted from wrongful overtaking; 26 persons were involved, 15 were injured, and, unfortunately, 11 others lost their lives,” the FRSC commander explained. “This is another unfortunate crash we pray not to witness again. I plead with motorists, especially commercial drivers, to be patient when they are on the wheel. Life has no duplicate.”

The sector commander added that the injured persons had been taken to Jebba medical centre and Emmanuel Hospital, Jebba, while the corpses had been deposited at the University of Ilorin Teaching Hospital (UITH).

Mr Owoade added that the obstruction caused by the crash had been cleared, and there was free vehicular movement.