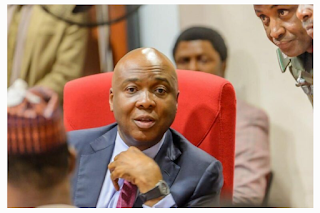 Former Senate President Bukola Saraki has commended Nigerian youth protesting against police brutality and injustices, as scores gather at the Lekki toll gate to mark the one-year anniversary of the #EndSARS protest.

Mr Saraki urged Nigerians in a statement on Wednesday morning not to forget the peaceful protest that was held last year.

Calling for comprehensive police reforms, Mr Saraki criticised the federal government for not resolving the issues that led to the protest a year after.

“It is worrying that despite the acceptance of the “5 for 5 Demands,” nothing has really been done to resolve the issues that caused protests in the first place,” he said.

Mr Saraki who served as the 13th President of the Nigeria Senate, mentioned that the security operatives guilty of the crimes against Nigerians during the protest have not been prosecuted or brought to justice.

“None of the policemen accused of torturing and extrajudicially murdering Nigerian citizens have been brought to justice, there has been no marked improvement in the funding or quality of equipment available to the Nigerian Police Force and these incidents of torture continue in many security facilities nationwide,” Mr Saraki said.

He condemned a situation where many young Nigerians remain in police detention without, adding that rather than trial abide by the laws, the police continue to threaten Nigerians that are expressing their rights to protest.

“None of the perpetrators of the attacks on Nigerians exercising their rights to peaceful assembly have been arrested or prosecuted, despite many of them being identified.

“Similarly, none of the perpetrators of mindless acts of destruction and looting of property worth billions of Naira have been arrested or brought to justice,” he said.

He asked the federal government to engage with Nigerians and respect their “constitutional rights and freedoms or face the risk of creating an atmosphere that enables a breakdown of law and order.”