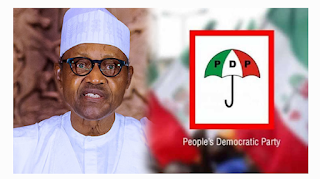 The Peoples Democratic Party (PDP) joins Nigerians across the country in remembering slain victims of the 2020 “EndSARS” protests against brutality of citizens and bad governance under the All Progressives Congress (APC) and the Buhari Presidency.

The party vehemently condemns the sustained brutalization of Nigerians by APC-controlled security forces, particularly the bloody assault on innocent youths at Wednesday’s EndSARS remembrance procession, in various parts of the country.

The PDP notes that EndSARS has come to stay as an epitaph of the manifest cruelty, wicked brutality, torture, illegal detention, mindless extra-judicial killings, gagging and suppression of citizens that were the hallmark of the APC and its administration in the last six years.

EndSARS has become the emblem of the resistance by Nigerians against the insensitive, incompetent corrupt, divisive and decadent APC administration that has brought so much anguish and pain to our dear nation.

It is shocking that, despite the promises to stop brutality and restore good governance, Nigerians who came out to march in remembrance of the victims of last year’s brutality were made to face the same trauma, if not worse brutality in the hands of security operatives.

Our party weeps at the cruelty inflicted on the Lagos Uber driver and many other youths by APC-controlled security agents as well as non-state actors, hired to repress Nigerians who were out exercising their constitutionally guaranteed rights.

The PDP demands that the Inspector General of Police, Usman Alkali Baba,  should immediately arrest and commence the trial of all security operatives involved in the heinous act against Nigerians.

Our party laments that most of the issues that led to the EndSARS protest in 2020, including bad governance and brutality of citizens, remain unresolved and charged the Federal Government to accelerate efforts into resolving them and bringing justice to the people.

The PDP commiserates with the victims of 2020 and 2021 EndSARS protest and urges Nigerians to remain calm as they rally on the platform of the PDP to rescue our nation and return her to the path of justice, national cohesion and economic prosperity.