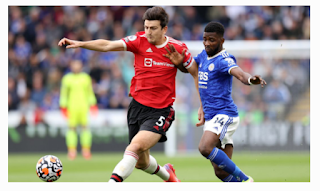 But Leicester fought their way back into the game, winning the six-goal thriller at King Power Stadium.

Youri Tielemans levelled for the home side, netting a brilliant goal in the 31st, leaving both sides with one goal each into the first half break.

Caglar Soyuncu’s 78th minute goal puts Leicester ahead United. But the Red Devils staged a quick comeback with Marcus Rashford equalising for the Red Devils in the 82 minute.

Just a minute after United’s comeback, Leicester took the lead again as Jamie Vardy fired in a half volley.

Patson Daka’s goal in 91st minute handed  Ole Gunnar Solskjær’s side their second defeat in the EPL this season.

The Red Devils have won 4, drawn 2 and lost two so far this season.