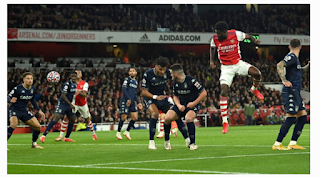 The struggling gunners dominated the game, grabbing all three points at the Emirate.

Ghanian midfielder Thomas Partey opened the scoring for Arsenal with a header 23 minutes into the game.

The gunners were awarded a penalty after Alexandre Lacazette was brought down in the penalty box towards the close of first half.

Though Pierre Aubameyang’s penalty was saved by Martinez, the Gunners captain swept in a rebound doubling Arsenal’s lead a few minutes to first half break.

Emile Smith Rowe, who emerged as the man of the march, sealed Arsenal’s victory at the Emirate, scoring in the 56th minute.

Aston Villa got a consolation goal in the 82nd minute as Jacob Ramsey brilliantly fired in a screamer for the visitors.

So far this season, Arsenal have garnered 14 points in 9 games, winning 4, drawing 2 and losing 3 games.