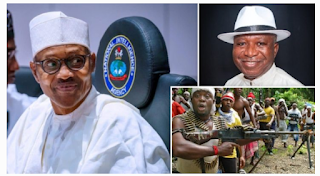 Some ex-agitators in the Niger Delta region who accepted the presidential amnesty have applauded President Muhammadu Buhari for reappointing Milland Dikio as interim administrator of the Presidential Amnesty Programme.

According to the statement, Mr Dikio has consolidated his position as head of PAP within one year in office.

“President Muhammadu Buhari has approved the renewal of appointment of Col Milland Dikio (Rtd) as Interim Administrator of the Presidential Amnesty Programme for another one-year tenure,” said the statement. “Col. Dikio was first appointed in August 2020 and had, despite the challenges, been able to command widespread respect amongst the various stakeholders in the Niger Delta.”

The former militants noted that the president took the right decision in Mr Dikio’s reappointment in the interest of peace and stability of the Niger Delta.

Tonye Bobo, national chairman of the Third Phase of the PAP, said by extending Mr Dikio’s tenure, the president had demonstrated his commitment to the development of the region.

Mr Bobo also commended Mr Buhari for not listening to naysayers, bent on derailing the programme and urged Mr Dikio to see his reappointment as an acknowledgement of his efforts in the last year and charged him to justify the fresh mandate by working for the sustained peace of the region.

He assured Mr Dikio of the support of ex-agitators, especially those in the third phase, adding that having keyed into his vision, they will work with him to achieve it.

“It is cheering news for us because it is what we clamoured for. So, we are thanking President Buhari for listening to wise counsel and extending the tenure of Col. Milland Dixon Dikio,” he stated. “Dikio has shown capacity, he has demonstrated in the last one year that he understands the workings of the programme, and when you listen to his vision and template, it is obvious he knows what is best for the ex-agitators and the region as a whole.”

Also, another ex-militant leader, Kingsley Umoh, also known as 007, noted that ex-agitators from Akwa Ibom were delighted with the development.

He observed that Mr Dikio had repositioned the scheme and given them hope with policies to make them entrepreneurs rather than depending on stipends.

“The man is a good man. You can see the stability enjoyed in the region within the past one year. He is honest and transparent and very unassuming,” explained Mr Umoh. “We pray that his reappointment will pave the way for him to complete the policies he initiated.”