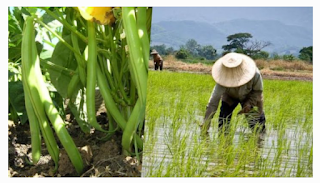 Nigerian farmers have decried water scarcity that has hit rice, beans and millet farms across the North.

In an interview, Idris Musa Sarkin Noman Abakwa, Kaduna, said he was afraid that local farmers might lose their crops due to lack of rainfall in the past three weeks.

As the rainy season stopped, many local farmers feared crops yet to mature might be lost without adequate water, Mr Abakwa.

According to him, floods and other ecological challenges have affected this year’s bumper harvest, causing scarcity of crops and food items in the markets.

A two-week survey conducted by a team of volunteer environmental journalists from various media outlets across the 19 northern states showed how many local farmers farming along the Riverbanks were forced to use irrigation to save their crops.

Mr Abakwa explained that most of the crops on his farmland had started drying up gradually, which was a sign of a huge loss for him.

According to him, beans, rice, millet, and sorghum farmers battle to salvage their crops. Some of them were forced to hire generators to pump water from waterways or rivers to their farms.

He further explained that most farmers across the North practised subsistence farming, few practised mechanised farming.

Mr Abakwa added that many farmers did not start planting their crops on time due to the nature of this year’s rainy season.

He mentioned the need to educate more farmers on averting the damage to their crops and other harvests.

The farmer called on state and federal governments to embark on sensitisation of farmers on the latest farming techniques to join the world in the fight against hunger and inadequate food in the market.

According to him, climate change can disrupt food availability, reduce access to food, and affect food quality.

He also called on governments to redouble their efforts towards sensitising rural farmers about climate change and adapting to new farming systems.