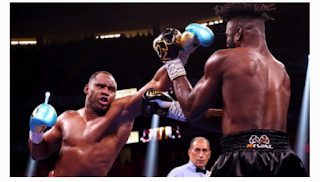 The duo came into the fight as undefeated prospects looking to move up in the heavyweight rankings.

The fight started with Efe putting a lot of pressure on Frank and establishing his jab while Efe was trying to find his counter.

Through the first three rounds, both men tried to find their rhythm but Efe was not throwing combinations and Frank was countering him very well. In Round 4, Efe hit Frank with a jab and he fell to the floor in what should have been ruled a knockdown but wasn’t counted.

In the 7th round, Sanchez landed a punch on Efe and he took a knee and got hit with a hook when the count should have started.

The foul was not given and it was ruled a clean knockdown. For the rest of the fight, Ajagba couldn’t find his range and his shots and it end up being a 97-92, 98-91, 98-91 clear unanimous decision for the now 19-0 Cuban Flash.