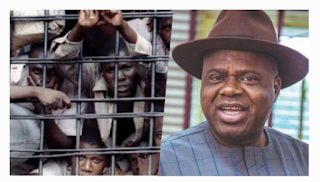 Governor Douye Diri has granted amnesty to nine inmates of the Nigeria Correctional Centre, Okaka, in Yenagoa, the State capital.

Mr Diri, who announced the gesture when he visited the centre on Tuesday, noted that he had constitutional powers to grant such favour based on recommendations from the Committee on Prerogative of Mercy.

While addressing the freed inmates, the governor advised them to change their ways and become responsible members of society.

He expressed displeasure over the number of inmates in custody, adding that the only way the centre could be decongested is by reducing crime in the state.

“Whereas you have all made written applications seeking for this discretionary exercise by the government of Bayelsa State, and having consulted with the Committee on Prerogative of Mercy and in accordance with the laws of Bayelsa state and in the exercise of my constitutional powers as the governor of Bayelsa State, I hereby grant you mercy,” said Mr Diri. “I do not believe we should have this centre congested with our brothers and sisters. In other words, the propensity for crime and criminality must be reduced. That is the only way we can decongest the Okaka Correctional Centre.”

He further stated that “if we grant amnesty and there is still the propensity to continue in crime, no amount of jail delivery can decongest this prison.”

He urged the pardoned convicts to turn a new leaf.

“Change your approach to life and become responsible members of society and contribute to the good image of Bayelsa state,” the governor added.