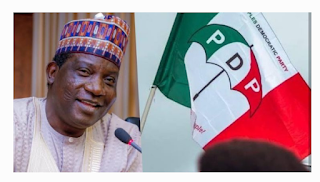 The Peoples Democratic Party (PDP) says Governor Simon Lalong’s “sudden” declaration of October 8 as a public holiday ahead of Saturday’s local government elections is an attempt to bar the party from participating in the polls.

It declared that the holiday was targeted at stopping the hearing of its appeal, at the Appeal Court, against the judgment of a high court barring PDP from participating in the election.

Edward Pwajok (SAN), counsel to PDP, stated the party’s position on Thursday. PDP had, on September 29, lost a case it filed against the Plateau State Electoral Commission (PLASIEC), challenging the party’s exclusion from the October polls.

The court upheld PLASIEC’s decision to bar the PDP from participating in the polls. Dissatisfied, the party went to the appellate court, which fixed October 8 for the hearing of the case.

The PDP, which urged its members to remain calm, was anxiously waiting for the appellate court on Friday when Mr Lalong declared the day a public holiday.

The governor had claimed, in a broadcast, that the aim was to allow civil servants to travel to their communities to vote.

But Mr Pwajok asserted that “the whole idea of the public holiday is to stop the Court of Appeal from sitting to hear our motion of our appeal against the judgement given by the lower Court in favour of PLASIEC.”

“We understand the game being played out. But all the same, we shall go to the appellate court tomorrow (today) for our case. If the court doesn’t open, we know what to say. If it sits, then fine,” Mr Pwajok explained. “I won’t say more until tomorrow (Friday) because I will be in court by 9.00 a.m. tomorrow.”

Garba Pwul, counsel to PLASIEC, described Mr Lalong’s declaration of Friday as a public holiday for the election as “very normal.”

“It is the right step taken for a cogent reason. I am surprised that PDP is giving the whole thing a colouration. After all, this is not the first time government is declaring a public holiday in respect of elections,” argued Mr Pwul. “Lalong, after all, is not a party to the appeal case. His party, the APC, is not. It is only PLASIEC that is a party to the case.”

He added, “In fact, former President Olusegun Obasanjo did something similar in 2007 when he declared a public holiday on the day a judgement was to be given on then Plateau governor Joshua Dariye’s impeachment case.

“On that Friday (judgement day), the Supreme Court couldn’t sit until after one month, when elections had been conducted. So, nobody should impute improper motive to what is clearly a convenient thing to do by a reasonable and caring governor.”