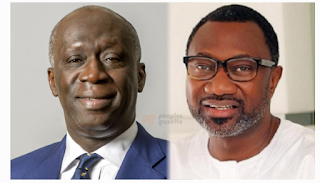 First Bank Holdings says billionaire businessman Femi Otedola is not the single largest shareholder in the bank, contrary to media reports. The bank has instead named Oye Hassan-Odukale as the leading single shareholder.

Messrs Otedola and Hassan-Odukale were disclosed as the only two substantial shareholders who have more than five percent equity interest in First Bank in a statement signed by the company’s secretary, Seyi Kosoko, and made available to the Nigerian Exchange Limited on Wednesday.

There is no information as regards the period of the acquisition of the shares by Mr Odukale and his entities especially as the statement of FBN Holdings in its financial report for the period ending June 30, 2021, did not register Odukale as a substantial shareholder.

Statutory and regulatory requirements of disclosing substantial shareholding in a public entity within seven days and 10 days of acquiring such – Sections 119 and 120 of CAMA 2020 may also have been fouled.