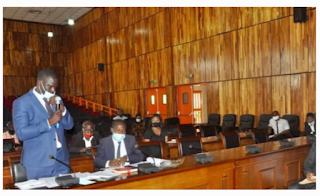 Abuja #EndSARS Panel on human rights violations by the defunct Special Anti-Robbery Squad SARS and other units of the Nigeria Police Force will reconvene on Monday after six months’ break.

The panel is reconvening amid threats by #EndSARS protesters to hold memorial events to mark one year anniversary of the historic demonstrations that shook the country.

The  panel was inaugurated by the National Human Rights Commision, NHRC, in 2020 to address the numerous cases of human rights abuses by the police, listen to the grievances of the affected persons and give compensation as necessary.

NHRC in a statement signed by its spokesperson Fatimah Mohammed said that the panel consisting of eleven members, chaired by former supreme court justice, Suleiman Galadima (retd.), would hear final written and oral addresses in eight petitions, “which signals the conclusion of the cases and adjournment for the panel’s report on them.”

Out of the fifty-five matters that were concluded before the break, twenty-two were either struck out by the panel or withdrawn by the petitioners and the panel had seventy-five other cases at different stages of the hearing.

The panel also said that thirty-three requests for compensation, as well as other legal and administrative remedies, were ready to be filed in compliance with the applicable statutes.