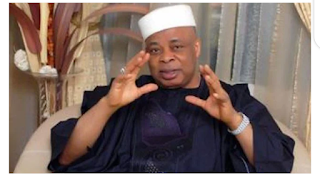 A former Minister of Defence, General Theophilus Danjuma, has hailed the book, ‘Standing Strong’, authored by a former President of the Senate, Ken Nnamani, which focuses on the alleged attempts by former President Olusegun Obasanjo to extend his tenure in office.

Danjuma, who served as defence minister in Obasanjo’s cabinet in the early 2000s, was also part of the supreme military council in the late 1970s.

The former minister, who was the chairman at the book launch in Abuja on Thursday, stated that the publication was “classic history.”

While congratulating Nnamani, he said, “The book is a classic history of a country and we have the unfortunate habit of not valuing and preserving our history. The result is that the lies and the distortions that hit the headlines survive.

“So, I want all of you if you forget everything this morning, you mustn’t forget the fact that the records of what really happened have been documented and everybody should try and possess it, read it and look out for witnesses.”

In his speech, the President, Major General Muhammadu Buhari (retd.), praised Nnamani and the Senate for helping to preserve democracy.

Buhari, who was represented by the Minister for Science and Technology, Ogbonnaya Onu, said but for the courage of Nnamani and his colleagues, the seamless transfer of power in 2007 would have been difficult, if not impossible.

He stated, “We thank Senator Nnamani and his colleagues at the National Assembly for standing strong in carrying out their constitutional duty in the defence of democracy in our dear country, Nigeria.

Also speaking, Vice-President Yemi Osinbajo saluted Nnamani, saying, “He (Nnamani) is a man that truly loves the nation. He wants to serve but he is not desperate, which informs why at the risk of losing his Senate presidency, he stood his ground. Your role in our national life is just beginning.”

Nnamani said he wrote the book to remind Nigerians of the dangerous path it could have taken but for the vigilance and courage of some legislators, and to challenge the citizens never to abandon the responsibility of protecting due process for democracy to survive

He added, “Our democracy was tested in 2006 and it passed. It was tested again in 2015 and passed. This has culminated in the Buhari presidency. The crucial 2015 test would not have been if we failed the 2006 test.

“The 2006 test was a test of if leaders will rise above fear and the politics of the strongman to strengthen democracy by upholding due process. It was a test of the solidity of our legislature. The 2015 test was a test of whether a ruling political party and an incumbent president will have the grace and patriotism to accept political defeat and allow the opposition to form a new government. This was not a simple test.

“Many African countries failed this test. The result of such failure is the collapse of national consensus and retreat into authoritarian politics with its attendant political instability and economic stagnation.”

Obasanjo has denied ever attempting to extend his tenure in office.