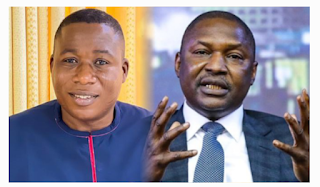 In a press briefing on Friday, the Attorney General of the Federation, Abubakar Malami, said a company belonging to Mr Igboho was involved in financial transactions with Mr Abubakar’s company.

He added that “It might be recalled that Abbal Bako & Sons and its promoter Abdullahi Umar Usman are suspects in the ongoing joint terrorist financing investigation.

“Abdullahi Umar Usman is by way of financial transaction connected to Surajo Abubakar Muhammad (who was sentenced to life imprisonment in UAE on charges of financing terrorism (Boko Haram).”

Mr Malami further said the financial transaction between Mr Igboho and Mr Abubakar’s company “shows the nexus between separatists’ agitation, terrorism financing, and disruptions of peace in the country.”

For rising up against Fulani herdsmen menace in Oyo State and planning a Yoruba Nation rally, the State Security Service (SSS) in July attacked Mr Igboho’s home, killing two and arresting about 13 of his family members.

Mr Igboho, who was declared wanted by the SSS, was arrested by Beninois police while trying to travel out to Germany.