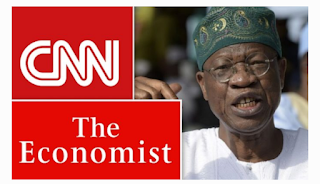 Mr Mohammed who spoke at a press briefing in his office criticised reports by both outlets, insisting that the country has witnessed a change since 2015.

“Why must you now reecho as if whatever CNN says must be true. Whatever (The) Economist says must be true,” the minister said. “I, as a Nigerian, the situation I met things in 2015 is not what it is today.”

Mr Mohammed’s claims came on the heels of the UK publication’s latest issue that highlighted Mr Buhari’s incompetence in combatting Nigeria’s major challenges such as insecurity, corruption and economic crisis.

“When violence erupts, the government does nothing or cracks heads almost indiscriminately,” the London publication had said. It also stated that Mr Buhari had failed in his promise of curbing corruption.

“Nigeria’s army is mighty on paper,” the London magazine said. “But many of its soldiers are ‘ghosts’ who exist only on the payroll, and much of its equipment is stolen and sold to insurgents.”

But Mr Mohammed believes that the claims which are similar to that of the U.S. 2020 annual report on human rights were inaccurate. He described the London magazine’s report as a deliberate attempt to pull Nigeria apart.

“When CNN put out a report that was not accurate we called them out. Why would we join hands with people to pull down our house?” the minister argued.

“I wish these things were even true,” he reiterated. Mr Mohammed stressed that The Economist and CNN have also in past published false information about the country.

“Why do you people want to join hands with people that just want to sell their arms by denigrating the military?” he added.

Days ago, the minister demanded that CNN tender an unreserved apology to the president for “acting unprofessionally” during the #EndSARS protest at Lekki tollgate where soldiers opened gunfire on protesters.

Despite live videos, witnesses accounts, CNN’s report and Amnesty International’s reports of casualties at the protest ground, Mr Lai insisted that nobody died.