Imams, pastors, media cause of bloodshed in Nigeria: Adesina - The Naija Weekly

Imams, pastors, media cause of bloodshed in Nigeria: Adesina 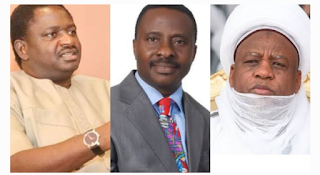 Spokesperson to President Muhammadu Buhari, Femi Adesina, has accused clerics of the Christian and Muslim faiths and the media of inciting violence in the country.

“The reckless utterances come even from the pulpit; from apostles, pastors and bishops, from the mosques; from sheikhs and mallams, from the newspapers, radio, television, Internet, everywhere,” Mr Adesina wrote on his Facebook page Thursday night.

“From the very old, the young, male, female. They just say incautious, thoughtless, imprudent things that swell up, and lead to violence, sorrow, tears and blood,” he added.

Known for his use of ill-mannered language in describing critics of the Buhari regime, Mr Adesina said life under his principal had deteriorated in the last 18 months.

“We have, indeed, passed through the most challenging of times in the past 18 months: security-wise, economically, socio-politically, and in many other ways.

“Life has descended into the Hobbesian state of nature; nasty, brutish and short,” the president’s spokesperson said.