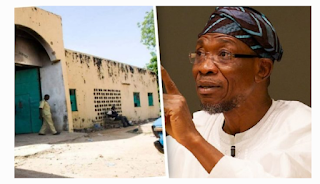 Gunmen have attacked the Abolongo Correctional Center in Oyo State, killing a soldier and freeing many inmates, Peoples Gazette has learnt.

A prison source told The Gazette that an operative of the state Amotekun was also killed and several others injured in the attack which occurred around 09:50 p.m. on Friday.

According to him, the gunmen arrived with dynamites and successfully attacked the medium custodial centre, leading to the escape of some inmates.

He explained that while several inmates escaped, some were captured.

“Some group of men attacked the prison last night, they came with dynamite, they blew our gate and had access to our custody in the successful attack,” he told The Gazette over the telephone.

“Already some inmates have been captured. we were unable to make any arrest of those that attacked us. We lost one soldier and one Amotekun and so many others were injured,” he added.

The spokesperson for the police in the state, Gbenga Fadeyi, did not immediately respond to The Gazette’s request seeking details about the incident.

But Olanrewaju Anjorin, the spokesperson for the Nigerian Correctional Service, Oyo State Command, confirmed the incident to The Gazette, stating that security agents were at the scene.

Mr Anjorin, however, could not immediately confirm the figure of the escaped inmates and the number of casualties, as senior officers were assessing the situation.

“The Oyo custodial centre in Abolongo was attacked around 09:50 p.m. by some gunmen. I’m right at the incident scene alongside the comptroller of Oyo State and other security agencies to ascertain the level of damage that was done here. We can’t confirm the full details of how it happened yet and those that escaped now as we are still carrying out our investigations,” he said over the telephone.

Also, when contacted, the Oyo commandant of Amotekun, Olayinka Olayanju confirmed the incident but denied that any operative was killed.

“No Amotekun operative was killed, but our men are on the ground and are still conducting our investigation,” he said.