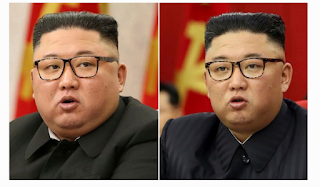 The South Korean intelligence service at a closed-door parliamentary briefing with South Korean lawmakers on Thursday, said it drew its conclusion after using artificial intelligence techniques, and analysis of super-resolution video of Kim and other methods to investigate Mr Kim’s condition.

His weight loss first drew a public stare when he made a public appearance after several weeks to convene a ruling party meeting in June. State media claimed that citizens broke down in tears after seeing a thinner Mr Kim.

South Korea-based online newspaper Daily NK reported in April 2020 that Mr Kim had to undergo heart surgery followed by his conspicuous absence from some key events.

Once overweight, the 37-year-old leader has been the subject of regular health speculation given his family’s history of heart disease. The leader’s father Kim Jong-il and his grandfather both died of heart issues.

However, despite Mr Kim’s pale appearance, North Korea observers debunked claims that the country’s leader had health challenges; rather they tied his weight loss to the result of his efforts to improve his physique.

They noted that he has continued his regular public activities and no unusual developments have been seen in North Korean videos.

South Korean lawmaker Kim Byung-kee said that The NIS dismissed claims that the recent public appearances of the North Korean leader was an impostor.

He said the NIS told the lawmakers that Kim’s weight has fallen from about 140kg to 120kg.

The agency said Mr Kim has been engaged in public activities for 70 days so far this year, a 45 per cent increase from the same period last year.

The North Korean leader is currently struggling to overcome what appears to be the toughest period of his rule due to economic hardships worsened by the coronavirus pandemic.