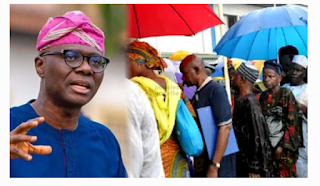 The Lagos State Government Tuesday said it had paid 291 retirees of the state’s public service N1.29 billion accrued pension rights for the month of September.

Director-General for the Lagos State Pension Commission (LASPEC), Babalola Obilana, announced this during the Retirement Bond Certificates Presentation to the 89th Batch Of Contributory Pension Scheme (CPS) retirees in Lagos.

Represented by LASPEC’s Executive Director, Finance and Investment, Olumuyiwa Oshin, the DG said the fund had been paid into the Retirement Savings Account (RSA) of the beneficiaries.

“This event has been put together to celebrate you our retirees and also present to you your retirement bond certificate, showing accrued pension rights due to you for the years spent in the service of Lagos State under the discontinued Defined Benefit Scheme (DBS),” he said.

Mr Obilana said one of the outcomes of the governor’s commitment was the regular issuance of the Retirement Benefit Bond Certificates to retirees of the state’s public service.

Commending Lagos for helping them process their pension, the retirees probed the workings of the Annuity and Programmed Withdrawal options for payment of their pensions.