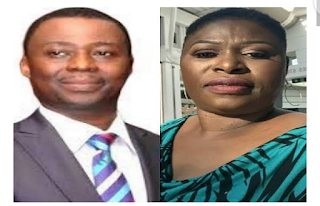 London High Court of Justice, Queen’s Bench Division, has ordered Ms Maureen Badejo to pay the General Overseer of the Mountain Of Fire and Miracles Ministries (MFM) International, Dr Daniel Olukoya and his wife Folashade £100,000, as damages for libel.

The ruling, seen by The Nation yesterday, was made by the judge on October 22, 2021.

The first to third claimants in the suit, designated as Claim No. QB-2020-003625, are MFM, Dr Olukoya and Mrs Olukoya while Badejo is the sole defendant.

“It is ordered and adjudged that the damages payable by the Defendant to the Second Claimant be assessed in the sum of £65,000.

“And is further ordered and adjudged that the damages payable by the Defendant to the Third Claimant be assessed in the sum of £35,000,” Mrs Justice Tipples held.

In assessing the damages, the court recognised a campaign conducted by Badejo against the Oluokoyas.

Badejo had alleged, among others, that the MFM G.O and the MFM UK trustees were fraudsters, claiming that they were involved in fraud being investigated by the Charity Commission.

She also falsely claimed that Mrs Olukoya – also a pastor in the church – was on the church payroll and earning a £35,000 salary from MFM, whereas she has never collected a salary.

Furthermore, she alleged that Dr Olukoya had abandoned his family and refused to take care of them.

The court also ordered Badejo to publish a summary of its judgment across nine of her social media channels for 10 days as a corrective measure to ensure the judgment reached all of her viewers.