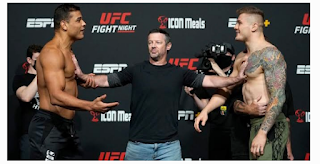 After a controversy filled build up, Marvin Vettori defeated Paulo Costa in a unanimous decision win at the UFC Vegas 41 on Saturday.

The fight was contested at light heavyweight, 20 pounds over the originally contracted middleweight limit and delivered as promised.

It was however not without some controversy in the cage.

There were worries about Costa’s durability when he revealed in an interview earlier in the week that he would not be able to make the 186 pound middleweight limit.

Also, with the way he came out in the first round, he seemed determined to end the fight early.

However, by the end of the round he looked tired and it looked like it was going to be a tall order for him to get through the 5 rounds.

Midway into the second round, with Costa finding his rhythm, he was ducked a point by referee Jason Herzog for an eye poke on Vettori.

It may have seemed a little harsh but he has been warned to keep his fingers closed. Costa won that round on every judges scorecard but the point deduction made it a draw.

The next 2 rounds were back and forth with Costa landing harder shots but Vettori responded with more volume and some grappling.

It was a surprise that Costa had his best round of the fight in the fifth, and he looked to get the finish but Vettori showed great toughness and durability. Both guys were coming off losses to the champion Israel Adesanya heading into this fight.

Adesanya is likely to face Robert Whittaker in a rematch of his title winning fight from 2019.