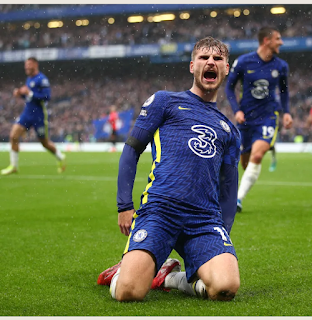 The result moves Chelsea top of the table for now, but how they had to work to get back to winning ways on a sodden afternoon in SW6!

Trevoh Chalobah’s second Chelsea goal put us in front early on and we had several chances to extend our lead before the break. Werner was among those denied and it was he who thought he had made it 2-0 with the interval fast approaching, confidently heading home a Callum Hudson-Odoi cross.

However, after a check by VAR the goal was overturned for a foul in the build-up, leaving Thomas Tuchel and his players furious.

There was no need for technology to intervene when Ben Chilwell brought down Tino Livramento inside the box on the hour, allowing James Ward-Prowse to equalise. However, the Southampton captain’s afternoon ended 15 minutes early when he was sent off for a bad tackle on sub Jorginho after another VAR check.

For Werner and Chilwell, however, things only got better. The German converted from close range after another sub, Ross Barkley, had prised the deep-lying Saints defence open, and then Chilwell put the full stop on proceedings with a well-taken finish that only just crossed the line.

The players on the pitch and the supporters in the stands can head into the international break with smiles on their faces. 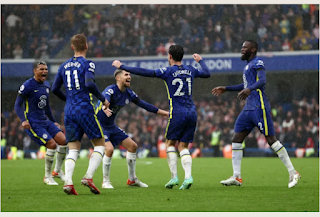 Tuchel shuffled his pack after back-to-back defeats, replacing half of his outfielders. Indeed, the starting XI line-up bore plenty of similarities to the side that finished the game in Turin on Wednesday.

Chalobah was back in defence and Chilwell started his first league game of the season. Ruben Loftus-Cheek’s good recent form was rewarded with a start in central midfield, while Werner and Callum Hudson-Odoi provided the attacking width either side of Romelu Lukaku.

Mason Mount was back on the bench after injury, while Theo Walcott returned for the Saints.

The Blues started like a team keen to settle any early nerves after a pair of rare setbacks. Inside four minutes Cesar Azpilicueta slipped a pass behind Southampton left-back Kyle Walker-Peters. Werner, playing wide right, latched on to it and saw his first-time shot kicked behind by Alex McCarthy.

Nothing came of that corner but we took the lead from our next, on nine minutes. Azpilicueta won it and Chilwell’s delivery was a good one, finding Loftus-Cheek whose glanced header was met at the far post by the stooping Chalobah. He now has two goals in three league appearances at the Bridge - not a bad return for the 22-year-old!

Azpilicueta and Werner were a menace down our right all half, and in search of a quick second the captain crossed in the direction of Lukaku. Only a sliding Jan Bednarek interception stopped the Belgian getting a shot away.

Rudiger headed another Chilwell corner on 15 minutes and then the Saints, full of purpose and numbers when they attacked, truly threatened Edou Mendy’s goal for the first time. Walcott teed up Ward-Prowse on the edge of the box, and his strike was typically clean but fired a fraction wide.

Straight down the other end Chelsea went, with Werner’s blocked effort looping up invitingly for Loftus-Cheek, 18 yards out. His first-time volley was sweet and true but agonisingly past the right-hand post. It would have been some goal.

LOFTUS-CHEEK WAS A DOMINANT FORCE IN MIDFIELD

We kept our foot on the accelerator, with no shortage of petrol in this Chelsea tank. Chilwell and Mateo Kovacic exchanged passes in a tight spot and suddenly the left wing-back was in, denied only by the outstretched leg of McCarthy. Not half-an-hour had been played and we could reasonably have netted three or four.

We hadn’t, though, and were nearly punished in the 33rd minute. Walker-Peters’ tricked his way deep into our box before crossing for Walcott, who couldn’t get enough purchase on his close-range header to test Mendy.

The chances kept coming. Next Rudiger charged upfield from halfway, Zenit style, before playing a cute reverse pass to Lukaku when he reached the box. The striker confidently finished on the turn but, alas, the offside flag was correctly raised, denying Rudiger one of the great assists.

Oriol Romeu blocked a Werner shot after some lovely Loftus-Cheek skill on halfway created space, and then with four minutes to go until the break, the German thought he had his first league goal of the campaign.

Hudson-Odoi had just been thwarted by a last-ditch challenge when we won possession back and the ball reached him on the left byline. His cross was well directed and found Werner, who thundered a header into the Shed End net before wheeling away to celebrate.

THE FIRST VAR INCIDENT OF THE AFTERNOON

Unfortunately, a VAR check spotted a possible infringement by Azpilicueta on Walker-Peters in the build-up to the goal. Martin Atkinson went over to the monitor and deemed it a foul. Tuchel was booked for his protests, and when Atkinson’s whistle brought a fast and furious half to a close soon after, the Stamford Bridge crowd let him know what they thought of his decision.

The second period started at a similarly frenetic pace as the rain continued to teem down in west London. Werner shot too close to McCarthy from inside the D, and he almost picked out Lukaku with a low centre.

But on the hour we were punished for our profligacy and misfortune. Livramento carried the ball into the box and drew a challenge from Chilwell, knocking the ball past him and going down. Ward-Prowse sent Mendy the wrong way from 12 yards.

NO MISTAKE FROM THE SAINTS SKIPPER

Tuchel sent on Mount for Hudson-Odoi and the boyhood Portsmouth fan was immediately in the thick of things, firing in a cross which Chilwell diverted goalwards. Annoyingly a flick off Lukaku took it wide.

An even better chance presented itself on 70 minutes. Lukaku held off Mohammed Salisu and backheeled the ball into Werner’s path, opening up space for the forward to drive into it. He cut inside Walker-Peters and got his shot away on the stretch, with McCarthy, already diving to his left, equal to it.

Next it was Southampton’s turn to be affected by VAR. Jorginho had only just come on when he was clattered into from behind by Ward-Prowse as he played a first-time pass. Atkinson initially gave a yellow card but after being advised to check the replay, he upgraded it to red.

THE CHALLENGE THAT ENSURED WE DOMINATED THE CLOSING STAGES. SOUTHAMPTON HAD BEEN A THREAT ON THE BREAK UP UNTIL THEN

A quick Chelsea attack involving Werner, Chilwell and Mount ended with the latter shooting at McCarthy with 10 minutes left.

Barkley for Loftus-Cheek was our final sub and he provided a quite sublime pass in his first minute of league action this season, picking out Azpilicueta with a fizzing diagonal defence-splitter. The Spaniard still had work to do and he did just that, crossing first time on the volley to Werner who couldn’t miss from a few yards out. Redemption!

WERNER GETS THE GOAL HIS PERFORMANCE DESERVED

The 10 men of Southampton couldn’t resist wave after wave of Blue attacks and we put the contest to bed in the final minute of normal time. Lukaku and then Azpilicueta struck the woodwork from close range after Mount’s low centre caused havoc, and then the ball fell to Chilwell who did well to guide his volley on target. McCarthy kept it out but again technology had its say, showing the ball had fractionally crossed the line before the goalie’s intervention.

CHILWELL KEEPS HIS STRIKE ON TARGET AND GETS HIS REWARD

A full-blooded and fantastic Premier League contest had the ending it deserved, and Chelsea the three points we thoroughly merited.