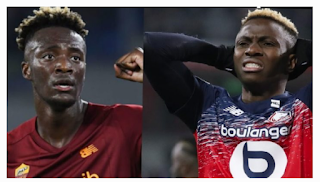 AS Roma coach Jose Mourinho was sent off to the stands as his side ended Napoli’s winning streak in the Serie A following a 0-0 draw on Sunday.

Napoli came into the contest having won their opening eight Serie A matches this season and dominated much of Sunday’s showdown, with Victor Osimhen denied by the post in the second half.

In a tightly contested affair, Roma created little. Tammy Abraham had the best of their chances, slotting wide from a good position in the first half.

As a frustrating Roma struggled in the second half, it got too much for Mourinho late on, and he was sent off for protesting with the referee.

Striker Osimhen thought he had won it at the death, but his header was ruled out for offside, with the point for Napoli enough to move them back to the top of the standings, above AC Milan on goal difference.

After making an impressive start to the season, Roma has won two of their last six league games to sit fourth on the table.