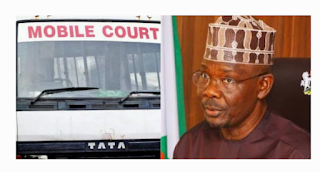 A court in Lafia has sentenced 48 persons to six months in jail for violating the environmental sanitation laws of Nasarawa State.

The mobile court, however, gave the convicts an option of fine between N5,000 and N50,000 at its sitting on Saturday.

The prosecutor, Abubakar Mohammed, who is also a Chief Environment Officer in the state, told the court that the suspects were transacting their private businesses while the monthly sanitation exercise was on-going.

He urged the court to sanction the culprits to serve as deterrent to other would-be offenders.

Meanwhile, Aliyu Agwai, Permanent Secretary, Ministry of Environment and Natural Resources, lauded other residents of the state for complying with the sanitation law.

Mr Agwai said access roads into the state were blocked while the exercise lasted to prevent vehicular movement from outside the state.

“We allowed only vehicles with permission from relevant ministries, or those on essential services to pass through and move around during the exercise,’’ he said.

He called on members of the public to always keep their environment clean to guard against outbreak of diseases.

“Residents should cooperate more with the government in their own interest to ensure that the state remains clean.

The last Saturday of every month is set aside by the Nasarawa State government for the sanitation exercise.