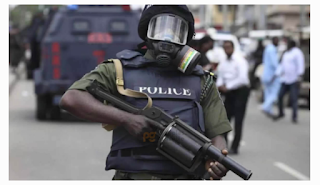 A newborn is reportedly in critical condition as officers of the Lagos State Police Command fired teargas canisters into moving commuter buses in Lagos.

“Cans of teargas had been fired into a moving bus where there is a nursing mother and her baby” an eyewitness told Peoples Gazette, adding that “The mother carried the baby and jumped off the bus towards safety. The gas was heavy, so I couldn’t stay either.”

More eyewitness reports from the scene noted that the infant is in dire need of medical attention and its mother, not yet identified at the time of filing this report, is distraught.

These developments are from the ongoing suppression of the first anniversary of the #EndSARS protests by security personnel at Lekki toll gate.

The state government had earlier vowed to clamp down hard on any demonstrators in the.

However, many youths stormed the Lekki toll gate for a memorial of the October 20, 2020 protests where soldiers of the Nigerian Army opened gunfire on unarmed protesters.

Arrests of protesters have already been made by the police. The Gazette reported on Wednesday morning that two protesters were dragged away into police vehicles while granting press interviews.

The state police had deployed tens of trucks and several personnel from the Task Force, Rapid Response Squad, Ajah Area Command and Divisional Police Stations to prevent the protest from holding in the area.