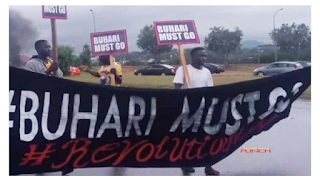 As the nation marked its 61st independence anniversary on Friday, some protesters, with placards bearing ‘Buhari Must Go’, trooped to the streets of Abuja, the Federal Capital Territory, to show their grievances over the state of the nation.

Also, in some parts of the South-East, the sit-at-home order by the proscribed Indigenous People of Biafra witnessed considerable compliance as residents stayed indoors, despite repeated declarations by governors in the region that people should disregard the directive.

These, coupled with killings across the country particularly in the North, tainted the country’s 61st Independence anniversary.

During the protest in Abuja, no fewer than five Buhari-must-go protesters were arrested by policemen.

The protesters had in the early hours of the day stormed the Dantata Bridge on the popular Airport Road in Abuja, calling for the resignation of the President, Major General Muhammadu Buhari (retd.).

They were, however, dispersed by heavily armed policemen who fired tear gas at them. The policemen also chased some of them.

However, one of the protesters told our correspondent that the policemen arrested five persons and brutalised them.

He said, “We and other young Nigerians were demanding an end to insecurity and bad governance in the country along Airport Road on Friday when some policemen came and violently dispersed us with teargas.

“They chased us into a nearby bush and caught up with five of the protesters. They brutalised them before taking them to the Galadimawa Divisional Police Division with their patrol vans. There are others whose whereabouts are unknown for now.”

When contacted, the police spokesperson for the FCT Command, Josephine Adeh, a Deputy Superintendent of Police, promised to get back to our correspondent, but she had yet to do so as of the time of filing this report.

Meanwhile, in Enugu State, one of our correspondents observed that the sit-at-home order by IPOB witnessed considerable compliance by residents of the Enugu metropolis.

IPOB had on September 25 asked its members to bring down all Nigerian flags mounted in the entire region, saying it would shut down the region as a sign of rejecting Nigeria.

IPOB spokesperson, Emma Powerful, said, “IPOB has declared 1st of October 2021 total shutdown in Biafra land as a sign of our rejection of the evil construct called Nigeria and there shall be no movement in Biafra land on this day.

“Also, IPOB has declared from today 25th September 2021 that all Nigerian flags mounted anywhere in Biafra land must be brought down, banks exceptional. IPOB leadership will communicate to banks directly and give them reasons they must peacefully bring down the Nigerian flag in their banking premises before we do it ourselves in our own way.”

In compliance with the directive, markets, parks, malls, petrol stations and restaurants were shut despite the presence of patrol teams in all the major roads in the state capital.

Major roads and streets witnessed low traffic and turnout of residents as business activities could not hold as usual following the directive.

At Emene, residents who could not go to the market to sell their livestock for the Independence celebration were seen instead trading along the road in their wheelbarrows.

A handful of commercial buses and tricycle operators were seen working earlier in the morning but from around 10 am, streets and roads were deserted. Also, few persons were seen trekking along the streets as well.

Speaking in an interview with one of our correspondents, a former leader of the United Progressives Party and chieftain of the All Progressives Congress, Chief Chekwas Okorie, appealed to the President to explore a political solution on the issues around IPOB and its leader, Nnamdi Kanu.

The former leader of the All Progressives Grand Alliance, said, “Let me say this clearly that the issue of Nnamdi Kanu cannot be resolved through the court process and the earlier we realise it the better for all of us. So, I appeal to the Federal Government under President Buhari to resolve Kanu’s issue and others who are prisoners of conscience politically and diplomatically.”

Also, Abakaliki, the Ebonyi State capital, was not its usual beehive of economic activities as the October 1 sit-at-home order declared by IPOB held sway.

One of our correspondents observed that many people stayed indoors as shops, filling stations, eateries, markets and motor parks, including those belonging to major interstate transport companies, were shut. On some streets, youths were seen playing football and some others brought their mattresses outside and lay on them.

Some hoodlums enforcing the sit-at-home order in Imo State set a driver and his bus on fire at Obama Nguru in the Aboh Mbaise local government area of the state.

An eyewitness told one of our correspondents that the attackers allowed the passengers of the bus to alight but prevented the driver of the bus from coming out of the vehicle, after which they set him ablaze in it.

Another truck en route to Umuahia, Abia State was also set ablaze at Ahiara junction in the Ahiazu Mbaise local government area. The driver however escaped.

The attackers torched vehicles at different locations in the early hours of the day.

Efforts to get the reaction of the police proved abortive.