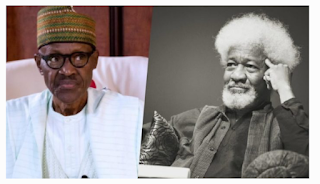 In a re-echo of what has characterised Nigeria since ex-President Goodluck Jonathan’s era, Nobel Laureate Wole Soyinka says that while the country is disintegrating, President Muhammadu Buhari has become increasingly lazy, clueless to fix the floundering nation.

He added, “The problem really is that this government does not have a holistic grasp of the problem of the nation and the environment in which we live and the time also in which we are living.”

Mr Soyinka’s latest tirade against Mr Buhari’s regime was against the backdrop of what he described as harsh and disorganised COVID-19 safety protocols for Nigerian travellers.

The renowned playwright further pointed out that expecting Mr Buhari’s regime to proffer a solution to Nigeria’s crises would be a waste of time, urging Nigerians to pile up the pressure on the APC government.

“If we are still looking to this government for solution, I think we really are lost,” Mr Soyinka said. “We’ve got to find the way of pilling up pressure to engage us to meet as equal beings across the entire nation for a national indaba involving various professions, ethnic groups, any productive sectors of this country should come together and really debate the future of this country.”

Citing citizens resistance to the military coup in Sudan, Mr Soyinka said the #EndSARS protest was one of the memorable times when Nigerians rose against oppression, though the protest ended on a tragic note.

Mr Soyinka’s comments came as the regime ramps up its pushback against The Economist’s latest issue that criticised Mr Buhari. The publication noted that under Mr Buhari, Nigeria had become a crime scene of destructive magnitude on the African continent, pointing out that terrorists and armed bandits are running wild because the president is corrupt and lazy, failing to do anything but render lip service following every deadly attack.

The president’s spokesman Garba Shehu agreed with The Economist that things had taken a turn for the worse in the country.

“The Economist is also accurate to state that they (insecurity challenges) have come to a head under President Buhari and the All Progressives Congress (APC) administration,” the president’s media acknowledged in a statement reacting to the report.

While admitting that insecurity has taken a deep plunge, spiralling out of control, Mr Shehu defended the Nigerian leader as more purposeful and pragmatic than previous administrations.

“It is only the Buhari leadership which has sought – ever, in over one hundred years – to identify the root causes of the herder-farmer clashes and find durable solutions,” he claimed.