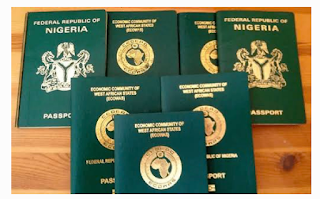 Despite being the largest economy in Africa, Nigeria has ranked 103rd (with 45 scores) in Henley Passport Index ranking of the world’s most powerful passports, with Burundi and the Republic of Congo on the 97th and 100th seats, respectively.

The Henley Passport Index, published since 2006, is based on exclusive data obtained from the International Air Transport Association (IATA), which has the most comprehensive and accurate travel information in the world.

Ranked in the first position are Japan and Singapore (192); Germany and South Korea coming in the second position with 190; and Finland, Italy, Luxembourg, Spain all together in third place with a score of 189.

Afghanistan is the worst passport to carry in the world with just 26 countries accessible to its holders, followed by Iraq, 28; Syria, 29; Pakistan, 31; and Yemen, 33.

The ranking, based on the most travel-friendly passports across the globe indicates that Ghana is far ahead of Nigeria, as it stands on the 84th spot. The latest edition was published on October 5.

Topping the African countries’ list is Seychelles at 29, followed by Mauritius at 33 and South Africa coming third and ranking 58 worldwide.

However, Nigeria, which stands on the same spot as Ethiopia, beats African countries like South Sudan, 104th, Eritrea, 105th; the Democratic Republic of the Congo, 106th; Sudan, 107th; Libya, 108th; and Somalia, 111th.

In its July report, Henley Passport Index placed Nigeria on the 101st spot, beating countries like Ethiopia, South Sudan, Eritrea and Democratic Republic of the Congo, Sudan, Libya, and Somalia.

The last index also shows that the Nigerian passport had become less valuable than it was in 2013, before Muhammadu Buhari became president, when the country ranked 78 worldwide and ahead of Congo and Burundi who both fell into the bottom ten category at the time.

Mr Buhari’s policies have continued to diminish Nigeria’s standing across the world, with development experts warning that the Nigerian leader’s poor economic knowledge and open support for brutality and extra-judicial executions of civilians by security forces will hurt the country’s estimation abroad.

Mr Buhari has frequently brushed aside criticism of his government’s economic agenda and citizens’ welfare, saying Nigeria’s status as the largest economy in Africa is indicative of the effectiveness of his regime’s policies.

A spokesman for the Nigeria Immigration Service did not return a request seeking comment about Henley’s latest index on Sunday morning.