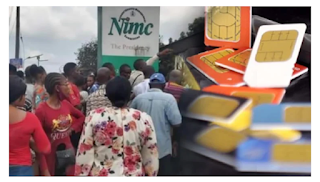 Telecommunication subscribers are clamouring for a two-month extension of the October 31 deadline for National Identity Number-Subscriber Identity Module data verification.

The President of National Association of Telecoms Subscribers, Adeolu Ogunbanjo, highlighted the need to further extend the deadline of the SIM-NIN exercise to allow for the full implementation of the security policy.

He said, “We have been at it for close to one year now. They started by giving a six-week deadline, and on and on till March, then June, and now October 31.

“In view of the current security situation, which necessitated the policy, we want the deadline to be extended to the end of the year, so that from January 1, there won’t be any excuse. But I also would want a situation where subscribers should take advantage of the remaining days left in this window.”

According to Ogunbanjo, registration centres for NIN are now jam-packed because the deadline is about to expire.

“Unfortunately, the centres are now jam-packed. I was at one on Friday. Another two months won’t be bad. We are pleading for a two-month extension – November and December – so that full implementation of the security policy can start in January,” he said.

Speaking on the number of registrations, he said about 60 million unique subscribers had linked their SIMs to their NIN.

Ogunbanjo said, “According to Association of Licensed Telecoms Operators of Nigeria, they said they had done close to 60-something million. And there are over 110 to 118 million unique subscribers. There is a need for an extension to cover everyone. Whoever doesn’t register afterwards by end of December would have themselves to blame.”

When asked if the date for the SIM-NIN linkage would be extended, a source in the NCC told one of our correspondents, “What I know is that the deadline is there. There has not been any statement yet on whether it would be reviewed or not.”

The Executive Vice Chairman, Nigerian Communications Commission, Umar Danbatta, had recently disclosed that over 180 million telephone lines had been linked to NINs.

Since the SIM-NIN policy came into effect, telecommunications companies have lost over 18.58 million subscribers after the total number of subscribers peaked at 207,578,237 in October 2020.

The NCC, in a recent radio broadcast, said the October 31 deadline for SIM-NIN linkage was sacrosanct.

According to the NCC, Nigerians without NIN will be denied the opportunity of acquiring driving licences and passports.

“Soon, people without NIN will be denied of necessary services that play vital roles in their lives including acquisition of driving licence, passport,” NCC’s Director of Public Affairs, Dr Ikechukwu Adinde, had said.

Reacting, the President of the Association of Telecommunications Companies of Nigeria, Ikechukwu Nnamani, said, “When we check how many people have been registered and see if we’ve met the target, if it does it may not extend. If it doesn’t, they may not. It all depends on the analysis of the target. This analysis would be done a few days before the expiration of the deadline.”

Also, a source in ALTON, said, “We think so, there should be an extension. Because there is still a long way to go. There are only about 81 million unique subscribers that have been confirmed. And there are about 187 million subscribers.

“Because of the NIN-SIM exercise, there has been a loss of subscribers. However, the NIMC still has capacity issues, as they cannot absorb everyone and need to expand their capacity. They need to expand their capacity. Based on the telecom ban in some states, there is hope for an extension. Otherwise, the people there would be disenfranchised. We as an association are also pushing for an extension.”