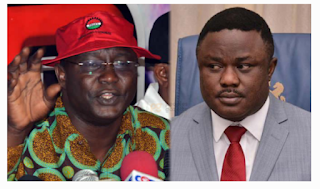 The Nigeria Labour Congress (NLC) has called on Governor Ben Ayade of Cross River to expedite action on concerns and demands of workers to end the ongoing strike and industrial unrest.

NLC president Ayuba Wabba appealed in a letter ‘Re: Notice of Industrial Action’, addressed to the governor on Wednesday.

According to the letter, Cross Rivers workers decried Mr Ayade’s refusal to address the non-implementation of workers’ promotions at state and local government levels, non-payment of gratuities, non-remittance of deductions from workers’ salaries and failure to fully implement the National Minimum Wage.

”Reinstatement of pensioners wrongfully removed from the payroll, lift of the ban on the collection of check-off dues from commercial drivers by NURTW and restoration of NURTW to motor parks in Cross River state,” added the letter. ”Immediate stoppage of deductions from workers’ salaries for the purchase of laptops and without workers’ consent. Payment of hazard allowance for medical and health and balance of 30 per cent CONHESS; and inclusion of all staff employed but yet to be put in the payroll by the state.”

He added that “your expeditious response will help to apprehend the ongoing strike action and the escalation of industrial unrest in Cross Rivers state, which has built a reputation of industrial peace and harmony for many years now. While we await your expedited action, please accept the renewed assurances of our highest esteem.”