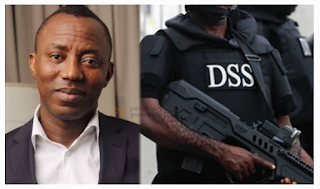 Armed operatives of the State Security Service on Thursday wore a smirk and looked away as pro-government attackers pounced on Yele Sowore. The Sahara Reporters publisher was at the Federal High Court in Abuja to monitor the resumed trial of Biafran separatist leader Nnamdi Kanu when he was attacked by thugs chanting ‘One Nigeria’ and raining abuses at journalists and defence lawyers.

Our reporters witnessed how Mr Sowore was physically attacked by the thugs loyal to President Muhammadu Buhari. Mr Sowore, who was dressed in Igbo attire, had his cap forcibly pulled by the attackers, eliciting laughter from the secret police agents.

Journalists promptly intervened to ward off the brutal attack against Mr Sowore, and security agents also weighed in. But no suspects were arrested in connection to the assault despite the presence of officers.

Instead, the SSS agents said Mr Sowore had no business coming to court for Mr Kanu’s trial because he has an active case of his own still pending in court. But the activist responded that he had the right to be in court for any business as he may deem appropriate.

Mr Sowore had previously been prevented from entering the courtroom, alongside other journalists and lawyers who arrived early to witness today’s proceeding. Mr Kanu is facing charges for leading the call for an independent state of Biafra, but the SSS also accused him of insulting Mr Buhari as “an idiot” while inciting his followers to similarly disrespect the Nigerian leader. He was abducted in Nairobi in June and immediately transferred to Abuja, where he has remained in government’s custody ever since.